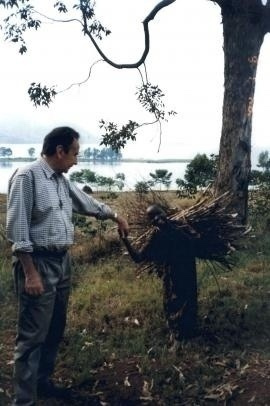 Father Costantino Frisia (called Nino), Barnabite missionary, worked for 37 years in Central Africa: 30 years in Zaire (now the Democratic Republic of Congo) and 17 years in Rwanda, where he stayed until his death in 2009.

Nino arrived in Rwanda in 1989, as Superior in the training house of Cyangugu – inaugurated two years earlier and situated in the premises of the convent of the Polish nuns Petites Servantes de Marie Immaculée, from where he departed every day in order to celebrate the Eucharist. Close to the border, there was also a small hotel that was run, along with the dispensary, by Les Pénitentes de Saint François, the Franciscan nuns.

At the time the climate described by father Frisia was – with the diocese of Cyangugu and among the different religious community - of a collaborative and brotherly kind.

Nonetheless, after the mass – celebrated by the Polish nuns – on that morning of 7 April in the “country of the thousand hills”, the cry of a faithful broke the silence: “Last night they shot down the plane of President Habyarimana!” (Hutu), followed by the words of a woman: “Today it will be a bloody day!”. From that moment on, father Frisia started receiving continuous calls from frightened Tutsi acquaintances and friends. “There are corpses all over the place”, they kept repeating. One of the first calls he received was from the airport commander, who shouted prey of panic: “Father, Nyangwitu (the notorious militia leader) told me that I am not a friend of the President!”. Soon afterwards the phone call of the Prior of the Carmelite nuns warned him that a soldier had said: “Tonight we are coming for you!”.

The first thing father Frisia did was to rush to the convent to take the nuns – who were almost all of Tutsi ethnicity – to safety, rescuing them from the upcoming genocide. For a time, his training house turned into a shelter, not only for the Carmelites but for anyone in need for a hiding place. The threats were more insistent than expected; nonetheless, the religious house was respected and many people hid there, except for – as Nino told us – the only Rwandan guy of the training centre, who had gotten home on Monday and fell victim to the tragedy.

Despite the prohibition to cross the border – since the beginning of the massacres, in facts, the order was: Aucun ruandais peut passer la frontière (No Rwandan is allowed to cross the frontier)- Father Costantino tried to take the nuns to Bukavu, in Congo, where Father Daniel, Superior of the local Carmelites, was waiting for them. The attempt was carried on also thanks to the aid of Soeur Danuta Mazurkowska, now 78, who recalled during phone conversations with Nino’s brother, Alberto Frisia, the rescue deeds as well as the bravery of Father Costantino. The Carmelite describes very emotionally also the seriousness of those moments, with the trucks full of armed men who descended the hill, and the risks he ran to rescue innocent women who would otherwise face imminent death, other than rape, risk.

Nino obtained the authorization to move the nuns from the prefect of Cyangugu, who almost probably alerted the militaries. When he arrived at the border, he was stopped by a truck of soldiers parked along the frontier: “Why do you want to take our nuns away? Let them work for us!”, he yelled visibly drunken and with a gun in his hand. The brave priest took the Carmelites back home - - but when he had to personally cross the border to reach his seminarians, he found them again in the convent of the Carmelite Fathers of Bukavu. It had been the French expedition Turquoise –that had intervened in Rwanda one month after the genocide– to take them to safety over there.

Father Costantino and his fellows thus had to move their training seat to Congo, first to Nguba, then to Mbobero, and also those times were certainly not easy nor peaceful. After the genocide, in facts, many Hutus, who were escaping Rwanda for the violence of the Tutsi militias who sought revenge, joined the Congolese army of Mobuto. In 1997, with the active support of Rwanda, Uganda and Angola, the rebel army of Kabila (made mostly of men of Tutsi descents) took sides against the collapsing regime of Mobuto, causing violent clashes and the death of thousands of civilians. In those days, after the murder of two priests in Bukavu, Nino should have left Congo with the planes put at his disposal by the Italian Ministry of Foreign Affairs; but he was not able to reach the departing convoys. For this, he said, “I thanked our Lord, because our people needed our presence, to feel encouraged and soothed in those risky days”.

In 1999, Father Frisia could eventually return to Cyangugu, in his old training house, and his return to Rwanda, we can say, was absolutely providential. Some Rwandan soldiers, key figures in the genocide, who had remained in Congo to escape justice, attacked the parish house of Mbobero in search for Nino - “a muzungu (a white European) will have some money”, they thought; fortunately the Father was not there, but two other priests were beaten up and threatened in his place.

Father Frisia devoted his life to Rwanda. In his last years, he committed himself particularly to promoting the justice and conciliation process, started by the government with the motto plus jamais (never again).

According to Nino, “The key duty of the mission of all Christians in a society poisoned by hatred is the reconciliation between the two ethnic groups. Those who are not able to forgive end up falling victim to their own resentment and hate. Those who forgive can heal and find again their tranquillity and peace."

After his death, countless were the letters, phone calls and messages of condolences of all those who had simply crossed their paths with him, or who were saved thanks to him. A host of children, sick and poor people, whom Frisia had helped with the full extent of his generosity.