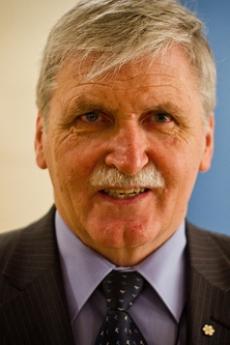 Romeo Dallaire was born on 25 June 1946 in Denekamp, the Netherlands. His family moved to Montreal when he was still a baby and he grew up in Canada, where he chose a military career. In 1993 he was commander of the UN Unamir contingent in Rwanda, where he was a “very particular witness”, according to the journalist Luciano Scalettari, “of events connected with the 1994 Rwandan genocide”.
In fact, his job there was to watch over and monitor the peace process that began with the negotiations and then the Arusha agreements of 1993-1994.
These agreements centered on the formation of a transitional government in which the party of President Juvenal Habyarimana (in power for over 20 years) would share power with the rebel movement of the Rwandan Patriotic Front. Dallaire reported large-scale illegal purchases of weapons on the part of regular soldiers, the Interahamwe militia and the civilian population, pointing out the risk of renewed violence: his reports were to remain unheeded.
The Arusha agreements were signed on 6 April 1994. This should have marked the end of the civil war between the army and the Rwandan Patriotic Front, ongoing since 1990, and the creation of a transitional government. But the plane bringing President Habyarimana back from the diplomatic summit was shot down shortly before its arrival.
Since he first set foot in Rwanda, Dallaire had been in charge of some 2,700 blue helmets in the country. When genocide broke out, the UN decided to withdraw most of its contingent, reducing it to just 300 soldiers. Dallaire opposed this decision: “Double the number of men at my disposal – wrote the UN commander – and I will stop the genocide”.
His appeals were ignored and the genocide meted between 800 thousand and one million victims in just a hundred days.
The harrowing experience of standing by, powerless, as this tragedy unfolded led Dallaire to try to kill himself on two occasions. His depression was probably also due to certain accusations against him concerning his conduct in Rwanda, to his decision not to resign when the UN contingent was reduced and to alleged failures on his part to report on the seriousness of the situation in the country in the months leading up to the genocide. All these accusations were, however, roundly refuted in 2003, when Dallaire published his book Shake Hands with the Devil, which inspired a documentary the following year. The text threw light on numerous unresolved doubts about his decisions and his relationship with the United Nations.
Later, Romeo Dallaire received several awards for his work as commander of the Unamir mission and today he is a member of the Canadian parliament.
Many years after those events, the former general is a valuable witness, who continues to denounce what happened in Rwanda and to fight against all genocides.

Since 12 April 2011, a tree and a stone have been dedicated to Romeo Dallaire at the Garden of the Righteous Worldwide in Milan.

Romeo Dallaire is honoured in the Garden of Milan - Monte Stella.