she was murdered for having denounced the Rwandan Genocide 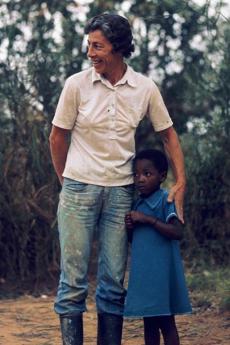 An Italian volunteer in Rwanda since 1972, Antonia Locatelli was witness to one of the massacres leading up to the genocide. In 1992, in the Bugesera region, south of Kigali, the Hutu extremists experimented the efficacy of their radio station in inciting people to murder.
Starting in the 1960s, the originally unhealthy and sparsely populated Bugesera region of Rwanda was colonized by Tutsis, who had been hounded from their lands. In the years that followed, strong demographic pressure brought many Hutus to settle in the region too and they looked enviously at the way the Tutsis had reclaimed and improved the area. This simmering envy was fertile ground for the racial propaganda broadcast by Hutu-power radio. As soon as the radio gave the signal, the manhunt began.
Antonia was an eyewitness to the massacres. In an attempt to save 300 or 400 Tutsis, she raised the alarm over the telephone, calling the Belgian ambassador, RF1 radio and the BBC to denounce what was happening before her very eyes. The day after her appeal she was murdered in front of her house by a group of interahamwe militiamen who had come specially from Kigali for the purpose. Thanks to her, however, the world knew and the police were forced to intervene and put a stop to the slaughter.
She is buried at Nyamata, close to a church in which thousands of Tutsis were massacred just two years later.