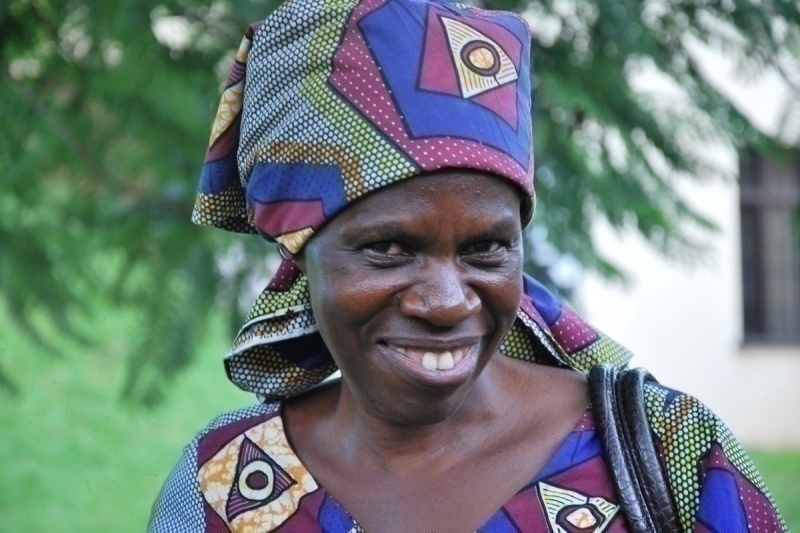 Godeliève Mukasarasi was born in 1956 in Gitarama, Muhanga district, where she worked as a social worker for 25 years. After marrying Emmanuel Rudasingwa, she moved to the village of Taba.

During the horrific 100 days of 1994 genocide, Taba was the scene of some of the bloodiest massacres committed by Hutus against Tutsis, namely by Interahamwe paramilitary militia who raped and killed hundreds of Tutsis in government offices. Godeliève’s daughter was also raped.

The mayor of Taba was Jean-Paul Akayesu, a teacher and school inspector in charge of managing the municipal police. Akayesu not only failed to prevent the fury of the militia, he also actively took part in several executions as a supervisor. Furthermore, he compiled a list he gave to Hutus for them to go from house to house looking for Tutsis.

In the immediate aftermath of the genocide, Godeliève decided to use her background in social work to create an organisation addressing the needs of women and children who had been left unprotected. This led to establishing SEVOTA, an organisation that still operates through a staff of professionals, to foster reconciliation between Hutus and Tutsis and to disseminate a culture of peace and non-violence among war widows and orphans.

Convinced that reconciliation had to pass through the recognition of crimes and perpetrators, Godeliève and her husband committed immediately to seeking justice for survivors. At a time when the country was still reeling from political instability and armed violence, they agreed in 1996 to testify before the International Criminal Tribunal for Rwanda (ICTR), a body created by the UN Security Council to try those responsible for the genocide. They agreed to testify in the opening case of the trial, which was to be held against their own mayor Akayesu, who had meanwhile been arrested in Zambia.

Shortly before appearing before the court, her daughter and her husband Emmanuel were murdered by armed militia. Despite the pain and threats she subsequently received, Godeliève had the strength to find four other people who courageously agreed to testify against Akayesu.

A very complex trial then began. Akayesu was charged with fifteen counts of genocide and crimes against humanity, including rape, and violations of the Geneva Convention. According to his defenders, Akayesu had not taken part in murders nor would he have had the power to stop them: they argued that Akayesu had been turned into a scapegoat who would pay for the crimes committed by the entire population of Taba.

On 2nd October 1998, Akayesu was sentenced to life imprisonment. The court found him guilty of nine crimes, including genocide and direct and public incitement to commit genocide. This was a landmark ruling, in that it was the first time that 1948 Convention on the Prevention and Punishment of the Crime of Genocide was applied. The court made it clear that genocide is a crime of specific intent that takes the defendant outside the scope of armed conflict. This is an extremely important legal precedent: judges recognised that rape and sexual violence aimed at destroying a specific group constitute genocide.

Speaking about the trial, Godeliève explained that “the fact that rape was taken into consideration to convict Akayesu has had a global impact on the issue of sexual violence against women. Despite being a rural woman having few means, I helped denounce injustice and fight for humanity”.

Today, Godeliève is still involved in SEVOTA, which brings together 80 associations with over 2,000 members. Among the initiatives she is most involved in is medical care for survivors of sexual violence during the genocide: 70% of women raped in Rwanda in 1994 were infected with HIV virus. Many of them are homeless, as their homes were burnt down during massacres. They are often forced to live in environments that are not conducive to psychological recovery, among the very men who raped them and killed their relatives.

“We have to learn to live positively with good and evil”, Mukasarasi said in an interview. “Everyone is still living with the consequences of the genocide. Some of the perpetrators ended up in prison, but once they got out, they went back to live close to survivors. The genocide is not over; survivors still live with those who committed the crimes”.