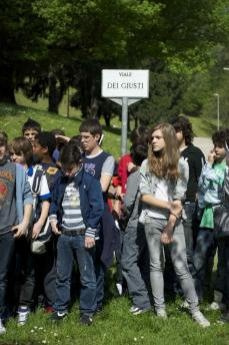 Students at the Garden

In the Milan Garden of the Righteous since past 7 April there have been five new trees for five unheeded witnesses who have tried to oppose totalitarianism in the Twentieth century and genocides: Romeo Dallaire, Jan Karski, Sophie Scholl, Aleksandr Solženicyn, Armin T. Wegner.

The Associazione per il Giardino dei Giusti di Milano, formed by Milan City Hall, Gardens of the Righteous Worldwide Committee and Union of the Italian Jewish Communities announced the names of the exemplary figures who will be honoured next Spring at Monte Stella.

for five unheeded witnesses who denounced genocides and tried to shake societal and invididual indifference. Very bravely, these human beings chose to speak the truth and stand up to totalitarianism.

Speeches by Milan Mayor Letizia Moratti, President of the Communal Council and of the Guarantors Committee Manfredi Palmeri, Chairman of the Gardens of the Righteous Worldwide CommitteeGabriele Nissim, the President of Milan's Jewish Community and UCEI delegate Roberto Jarach.

In the presence of the Honorary Consul of Armenia to Italy Pietro Kuciukian and the relatives of the Righteous we will plant trees and place memorial stones to remember::

Romeo Dallaire
Canadian commander of the UN force in Rwanda who reported many times the United Nations about the impending genocide
Milan Garden of the Righteous statement, by Romeo Dallaire, 7 April 2011

Armin T. Wegner
intellectual volunteering in the Military Healthcare Service in the Mideast, who documented and reported to the world about the Armenian Genocide and demanded Hitler to stop the persecution of Jews

The speakers will be in dialogue with:
Paolo Ghezzi, Pietro Kuciukian, Roberto Jarach, Luciano Scalettari.