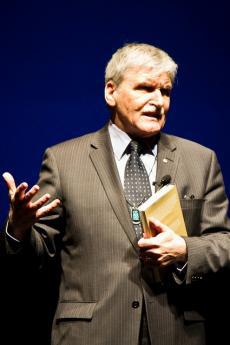 Journalist and Solidarity exponent Konstanty Gebert presents the figure of the Blue Helmets General who tried everything possible to stop the Rwandan genocide.

General Romeo Dallaire was given a mission. The Canadian officer in command of a two thousand-strong UN contingent in Rwanda was to supervise the implementation of a peace accord signed in 1993 between the Hutu regime and the mainly Tutsi guerrillas fighting it. As a disciplined officer he tried his best to obey the orders he was given, but he soon realized it was futile. Not only the government in Kigali was not implementing the accords, but a faction within it was actively preparing a massacre of the entire Tutsi population. He requested additional troops, as per the original mandate, but no UN member state was willing to provide them. He requested APCs and helicopters – again, his request was denied. He asked for permission to seize clandestine arms caches being readied for the massacre – his UN superiors replied this would be going beyond the terms of his mandate. In other words, he was ordered to sit quietly and watch a genocide being prepared.


This he refused to do. He negotiated, cajoled, threatened, pretending his contingent was what is was supposed to be: a powerful, vigilant and armed representation of the moral will of the international community. In fact, it was a sop thrown to soothe public opinion concern, too small and too hobbled by orders from above to have an impact. When the genocide started, as Dallaire had for months been warning his superiors, he immediately demanded an additional three thousand men and the necessary equipment. He was sure that with such a force he can still stop the bloodbath. But as ten Belgian soldiers under his command were kidnapped and murdered by Hutu forces, the UN decided instead to withdraw three fourths of the rump contingent. Dallaire, who did not attempt to rescue the kidnapped men – his soldiers were all too busy trying to prevent Tutsi civilians from being butchered by the Rwandan government – will be later accused of cowardice by the Belgian authorities.

As UN soldiers withdrew, the thousands of Tutsi civilians who had fled under their protection were massacred by Hutu militias and soldiers, often within eyesight of the blue helmets. 800 000 people were to be murdered within six weeks, until the guerrillas defeated the genocidal regime. Of the dozens of thousands who survived, such as the residents of the “Hotel Rwanda”, made famous by the eponymous feature film, many owed their lives to the tireless efforts of Dallaire and what must be rightly referred to as his skeleton crew. But even the UN contingent was eventually beefed up again, due to international outrage, it was too late for the hundreds of thousands who had been killed in the meantime. Dallaire kept demanding action, but he was denied, as usual. Even his request that the radio station which coordinated the massacres be jammed was rejected; high cost was quoted as a reason.

Returning to Canada after the end of the failed UN mission, Dallaire did not keep quiet. He publicly denounced the UN top brass and the member states which could and should have acted, but remained indifferent. Dallaire had done what he could to limit the massacre, indeed, he had done much more than could have been expected. Yet his conscience, plagued by the horrors he had seen and had been prevented from stopping, did not leave him in peace. Suffering from PTSD, he was medically discharged from the Canadian armed forces. His discharge stated that he is no longer fit to command. Nobody else was discharged, let alone punished, for their role in permitting the genocide to happen.

In 2000 retired general Dallaire attempted suicide, and was saved in extremis. Since then he has recovered, if not from the pangs of conscience which still plague him. He described his Rwandan experience in “Shake Hands with the Devil”, one of the most important books of the last decade. Awarded honorary degrees by a dozen universities, he is a consultant to a number of human rights NGOs and institutions, and a prolific speaker. His accusations of the UN and leading member states are damning, yet he never shields from recognizing his own responsibility as well. In a world in which only too often individuals are fraudulently labeled “the voice of conscience” in this or that conflict, Dallaire needs no label: he actually has a conscience, and acts on it.