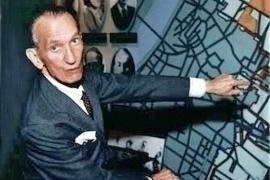 Jan Kozielewski (code name Jan Karski) was born into a family from Lodz and was the youngest of eight children. A model student, Jan was soon recruited into the diplomatic service and was posted to Paris and then to London. In 1939 he joined the Polish army, in the cavalry regiment. On 1 September of that year Poland was invaded by the Germans, and two weeks later by the Soviets. Captured and detained in a prison camp, Karski managed to escape and joined the Resistance while most of his companions were shot by the Russians. He skilfully liaised between Polish combatants and the West. In 1940 he was captured and tortured by the Gestapo during a mission in Slovakia; fearing that he would reveal information under torture, he slashed the veins in his wrists but was saved and taken to hospital, from where a Resistance commando helped him to escape and resume his official mission as liaison officer.

In 1939 Poland's Jews were confined behind barbed wire in ghettos, where they suffered from hunger and unmentionable hardships. In July 1942 the Nazis began deporting them to extermination camps. At that time, as an underground diplomat of the Polish government in exile in London, Jan Karski prepared a secret mission to smuggle information out of Poland to Great Britain and Washington. Before his departure from Warsaw he met with two leaders of the Jewish Resistance who had managed to get out of the Ghetto and who told him about "Hitler's war against the Jews". According to their calculations, the Nazis had already killed more than 1.8 million Jews and had taken approximately 500 thousand ghetto internees to an extermination camp 96 km from the Polish capital. The resistance leaders begged Karski to inform Churchill and Roosevelt and pressed him to verify their claims in person. Karski, who had a photographic memory, agreed: in August 1942 he entered the basement of a house in the "Aryan" quarter bordering the Ghetto, changed his own clothes for rags bearing the star of David and was taken "into Hell".

Many years later, recalling those moments, Karski simply said: "I saw terrible things", but in Claude Lanzmann's film Shoah he would describe naked bodies sprawled in the streets, emaciated people starving before his very eyes, expressionless children devoid of all emotion and young members of the Hitlerjugend chasing Jews and jeering at their sufferings. Accompanying Karski were Menachem Kirschenbaum and the lawyer Leon Feiner, who throughout his visit continued to whisper: "Remember this, remember it". The Jews wanted the world to know about the German extermination camps.

In September, the deportations from Warsaw intensified. Feiner –who was to become one of the hundreds of thousands of victims – communicated to Karski the demands to be passed on to the Western powers: once informed about the genocide taking place, the Allies had to take responsibility for stopping it, even by bombing German cities. Feiner concluded: "Make sure that no western leaders can say they knew nothing about it".

The two men then took Karsky to Izbica, a small town near Warsaw and a collecting point where thousands of Czechoslovak Jews were searched, undressed and loaded onto trucks directed to the Belzec extermination camp. Here, Karsky, disguised in a Ukrainian militia uniform, witnessed the arrivals of thousands of starving and terrified Jews, he heard the heartrending screams of the women and children and smelled the stench of burning human flesh.

Back in Warsaw he readied himself for his dangerous trip to London bearing microfilms of hundreds of documents. Fearing the consequences of his Polish accent at the border and at roadblocks, he had some of his teeth extracted to provoke swelling that could justify his silence when faced with the Germans. During his journey, he kept his hands well hidden to conceal the scars of his attempted suicide. He reached Berlin and then crossed Vichy France and from here travelled into Spain and lastly to London via Gibraltar.

In London he delivered the microfilms and described the Resistance and the situation of the Jews, emphasizing that their fate was even worse than that of the Poles. Many of his superiors thought that the Jewish question was just a marginal part of the national tragedy and feared that victimizing the Jews would harm the Polish cause, making it appear less important. In February 1943 Karsky met the British Foreign Secretary Anthony Eden who responded to his request for help by affirming that Great Britain had already accepted 100 thousand Polish refugees and could do no more than that. Karsky also informed the representative of his government in exile, Szmul Zygielbojm, who, crushed by a feeling of impotence, killed himself on 12 May 1943. He left a letter of protest against the widespread indifference to the systematic extermination of the Jewish people: in Warsaw during those months the Ghetto uprising had broken out and the Nazis had razed the whole area to the ground in response to the desperate resistance of its inhabitants.

Two months later, in July 1943, Karski reached the United States, where, although backed by strong popular support, he found the same inertia on the part of the authorities that he had found in London. His meeting with Roosevelt was disappointing. Karski hoped to influence Felix Frankfurter, a Jewish Supreme Court judge who stated: "I’m not saying that this young man is lying, but that I am unable to believe him".

His mission over, Karski was eager to get back to Poland, but his superiors prevented him from returning: by then the Germans had him in their sights and he was forced to stay in America, where he gave interviews and wrote a book entitled Story of a Secret State. One year later the Polish government in exile, for which he worked, was dissolved: Poland had passed into the Soviet sphere. Karski obtained a doctorate in the American School of Diplomacy and taught at Georgetown University until he retired in 1984. In 1954 he became a United States citizen. He gave numerous lectures, expressing his opinions against Communism and in favour of a free and independent Poland. He devoted more than ten years to writing The Great Powers and Poland: 1919-1945, published in 1985. In 1965 he married Pola Nirenska, a ballerina and choreographer of Polish-Jewish origin and the only member of her large family to survive the Holocaust. For many years Jan Karski preferred not to talk about his "mission impossible", and he felt himself to be a failure: "I have the feeling that the Jews did not have much luck with me, I was too insignificant to arouse any interest in their cause". Only in 1981, at the invitation of Elie Wiesel, did Karsky recall: "The Lord appointed me to be a messenger and writer during the War, when, it seemed to me, it could have been useful. It was not …so I became a Jew. Like my wife's family – who all perished in the ghettos, in the concentration camps and in the gas chambers – in this way all the murdered Jews became my family. But I am a Christian Jew. I am a practising Catholic. Although I am not a heretic, my faith tells me that Mankind committed its second original sin through action, omission, self-imposed ignorance, insensitivity, self-interest, hypocrisy or rationalization devoid of feeling".

Moshe Bejski – who awarded him the "Righteous among the Nations" medal the following year – said of Jan Karski: "I shall always remember the rage he harboured in his body when he spoke before me the day he received the Yad Vashem award. He was still furious with Roosevelt and Churchill, the two powerful heads of the coalition who had not listened to him. He felt a failure and I comforted him".