author of The Gulag Archipelago 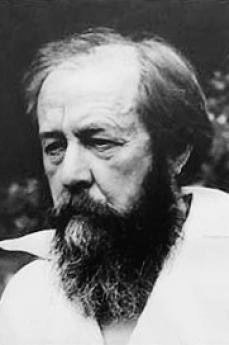 He was born on the 11th December 1918 in Kislovodsk, in the Caucasus. In 1941 he graduated in Maths and Physics at the Rostov University and attended to the Philosophy, history and Literature courses at the Moscow University.
He fought in the Soviet Army against Hitler's Germany and, in 1945, he was arrested with the accusation of anti-soviet propaganda and for having criticized Stalin in a letter to a friend. He was condemned to 8 years of hard labour and to three of forced residence.

He started writing and, in 1956, with the destalinization, he was given the possibility of publishing the story A day of Ivan Denisovich on the review Novij Mir (New World). The brief story tells, for the first time, the life of an ordinary man inside a lager: a denounce that will make Solženicyn famous all over the world. After Kruscev fell and the persecutions against the intelligencja began again, he was expelled from the Union of the Soviet Writers in 1969.

The following year, he received the Nobel prize for the novels The First Circle and Cancer Ward, but he could draw it only in 1975, when he was expelled from USSR. Solzhenitsyn devolved the proceeds of the Nobel to the Fund for the Political Prisoners, that he will support until the fall of the regime. In 1973 the KGB seized the manuscript of his most important work The GUlag Archipelago. He was then forced to publish it abroad. The first volume came out in Paris in December and provoked an enormous scandal all over the world: Solzhenitsyn was arrested and expelled from the country in 1974. He first went to Zurich, in Switzerland, and then he lived in Vermont, in The USA. In 1994 he went back to Russia.

The GUlag Archipelago is an essay of narrative investigation, a particularized and pitiless denounce of the mass repression and of the Stalinist concentration universe. The writer spent the whole Seventies writing it. In 1989, with the fall of the Berlin Wall, the work of Solzhenitsyn could be published in the USSR and The GUlag Archipelago appeared in episodes on the review Novij Mir.

Since 7 April 2011 a tree and a stone have been dedicated to Aleksandr Solženicyn at the Garden of the Righteous Worldwide in Milan.

Aleksandr Isaevich Solzhenitsyn is honoured in the Garden of Milan - Monte Stella.