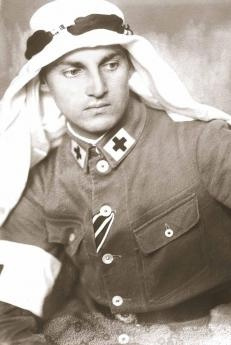 “These letters deal with death, some of them are addressed to dead people. When I wrote them I didn't know one day I would collect them in a book. But in front of extermination, within the pale horizon of burnt land, I was unwillingly bound to communicate something of what was shaking be face those expressions of human existence which could be the last ones. I wanted to do so not only with my own friends, but also to a wider, invisible community”.

So wrote Armin Wegner from the desert of Anatolia between 1915 and 1916. When he was a volunteer in the German Health Service he was eyewitness to the deportation and extermination of Armenians A million and a half women, elderly, children. Destination: Nowhere.
Armin Wegner risked his life to hand the world the evidence of genocide. He was a witness, a Righteous, who put himself so much in the victims' shoes to become he himself a victim, suffering for the rest of his life for what he had witnessed.
After seeing horror, he chose to witness the truth about the tragedy ogf genocide, not only through his writings, but also by the means of a photographic documentation which is extremely important for the Armenians, who have uptil now been victims of Turkey's genocide denial.

Not only that. Armin Wegner was thus the only German intellectual who in 1933 dared raise his voice, by addressing Hitler a passionate protest letter against the anti-Jewish behaviours of his regime.
Mischa Wegner, with whom I have made friends, had thrown a part of his father's ashes into the crater of the Stromboli vulcano, but he kept another part at home. In 1996, together with a tv troupe, we took them to Armenia and buried them there in the course of an official ceremony, into the "Wall of Remembrance" of Yerevan's genocide museum. On the same day a new stone was placed in the street named after Armin Wegner, the 13th street of the Shahumian district.
The son of a German, allied to the Turks, was greeted by the grateful hug of the 100-year old Armenian survivors who have not forgotten. As it happened after Willy Brandt's apology in 1970,, at the monument of the Warsaw ghetto, this gestures dissolved many shadows.
Survivors and witnesses of truth keep alive the memory of the past, in the hope to overcome the indifference of a "wider, invisible community” (Armin Wegner, The Road without Return. A Martyrdom in Letters, Berlin, 1919).

The tree for Armin Wegner in WeFor