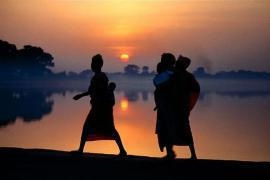 To mark European Day of the Righteous in 2016, Gariwo suggested to pay homage to the extraordinary contribution of the world of women to the human race. The reason for this was that women have actually always born on their shoulders too heavy a burden, i.e. the suffering of the entire world.

On 6 March, we wish to honour their strenuous struggle in the defence of their dignity, which is trampled on whenever they, as human beings, are considered as “B class”, “weak gender”, “witches to be sentenced to arson”, “vixens” or “handmaids” - and definitely as “ribs”, secondary parts of a skeleton belonging by law to somebody else. We also wish to honour the strength of the mothers who claimed their condition inside and outside the home walls to advocate the defence of the weakest people, sometimes even defying their families, society or the state when their children are exploited, oppressed and persecuted and become symbols of a universal demand for dignity and equal rights, tolerance and freedom, democracy and civil progress.

This is why we sought to unite the symbolic date of 8 March, International Women’s Day, with its significance of our collective memory, to 6 March, European Day of the Righteous, to be dedicated to strong and iconic feminine figures.

We will hold in Milan a three-day event with music, poetry, reflections, meetings, to culminate in the traditional ceremony at the Garden of the Righteous on Monte Stella Hill, and many have followed us with celebrations dedicated to women in the other Gardens of the Righteous, at schools and at public discussions.

All over the world, there is a growing awareness of the special role of women in every field of human development. The contribution of feminine specific role, its added value, nurtured with capabilities of listening and inclusion, openness and cooperation, weaving of relationships and solidarity, determination and resolve, sense of justice and pity, is no more challenged.

Also in the field of social advancement, in the commitment to defeat the plights of poverty and inequality, to win over all kinds of discrimination, starting for the ones that they are subject to in the first place for their feminine condition, women are in the first row. In the Western world, their struggles to have their rights recognised on a par with men, have helped make overall society grow, and build a better human and civil wellbeing.

The passage into the new millennium though witnessed to the appearance on the world stage of the new challenges of globalisation, the economic crisis, the rise of the emerging countries, with the outbreak of new conflicts and the sharpening of unresolved contradictions. The infightings in the Muslim world, the rise of fundamentalist drifts that exploit religion ideologically to pursue political ends, as well as of bloodthirsty groups like al Qaeda and the IS, the threats of terrorism and the weaknesses of the Western world, Europe and the United States, divided and submitted to the blackmail of economic and geopolitical strategies, once more place the feminine condition at a disadvantage in the first place, and imperil the so hard-won achievements, which had been reached so far.

The reaction yet did not take long to come: albeit this was achieved with a great deal of difficulty, a new will of the most aware and courageous women is rising to exit isolation and anonymity, subjugation, brutalisation and humiliation, making them the vanguards of a transversal movement with no geographical boundaries, national, ethnical, political or religious boundaries; a movement of rebellion that has much to do with the defence of fundamental human rights and therefore crosses those boundaries, rejecting any logics of belonging that in the name of a misunderstood identity may sacrifice human dignity.

From Africa to Asia and Latin America, we find female journalists, students, activists, and militants who even risk their lives to unmask torturers and murderers, to claim equality and respect, to demand fair life and work conditions, freedom and democracy.

This struggle broadens from the gender issues to encompass the defence of every human being, and takes up a symbolic universal value, configuring itself as the queen of all battles. Every woman who refuses to bow to the social and political diktats that oppress her fights not only for herself, but also for her children, husbands, friends, for all women, but also for all the oppressed and the persecuted.

The same way as people call for the international community, the judicial and legislative international and supranational entities, ranging from the International Criminal Court in The Hague to the United Nations, the European Parliament, the Council of Europe, OECD and so on, to report the lack of an intervention in the areas at risk of genocide, or of active policies to reduce inequality and discriminations in the poorest and most backward countries, so we need to advocate a better presence of those institutions in the safeguard of the feminine condition. Too little has been done so far and too often women have paid the highest price on the altar of geopolitical balances.

Daniel Goldhagen advocated a new awareness and enlightenment of the countries and their leaders on their way to learning how to prevent gross crimes against the humanity.

As well as the Jews have been considered for centuries as the perfect scapegoat, able to strengthen social and political cohesion in the name of a common enemy to dehumanise and a danger to defuse through marginalisation and annihilation, so the feminine gender has always been the target of excellence, a condition to exploit in very many ways, giving rise to the broadest and longest-lasting persecution in human history.

Today, when the Genocide-word is used to describe a wide variety of mass atrocities, it is even more dutiful to remember that women are discriminated and subjugated all over the world, that their struggle to defend themselves is a fierce struggle against a creeping and widespread genocide, the most ancient and the steadiest one, i.e. the genocide against the female gender.

This is why we deem it as very important to underline the upsurge in women’s awareness in the past 50 years, and the need for more awareness of its value among all social actors, for a renewal, in society and culture first of all, that may accompany a transversal change in society, politics and institutions.

This is why on 8 March at 11, at the Garden of Monte Stella in Milan, we will remember six outstanding women who have been on the frontline of this battle all over the world.

We will unveil the stones beneath the trees dedicated to three girls: an Afghan rapper, a doctor from Darfur and an Iraqi deputy - committed to safeguarding themselves and the trampled on dignity of their fellow women: a charismatic Indian lawyer who dedicated the whole of her life to this purpose: two “mothers courage” who did not hesitate to defy death to defend their own right to learn about the fate of their children, persecuted and killed for their ideas, from Argentina to our Sicily.

The function to provide cultural orientation and educational reference points, which we work hard to assign more and more poignantly to the Garden of the Righteous of Milan, cannot be anything but strengthened by the proposal of such representative figures of women’s pivotal role in the history of humanity. Our aim, as usual, is to keep the bonds between historical memory and current affairs, with a particular emphasis on our vision of the present and the challenges that await the younger generations in terms of responsibility for designing the future.