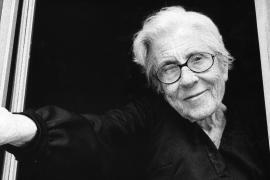 “Be careful, as I don't want people to come in. If you let someone in, be him a mafioso or a fugitive, I shall go to my mother's... I won't let anyone in”. Felicia had demanded this from her husband. On the contrary, after the death of her husband and the murder of Peppino, Felicia would open her door to all those who wanted to get to know about her son: "I like talking with them, I like my son's thing to broaden, as they understand what the mafia is about. And people flock here, and how many! They imagine: “This woman here is from Sicily and will keep her mouth shut”. I don't, instead. I must defend my son, politically, I must defend him. My son was no terrorist. He struggled for right and precise things”. This is why on the day of her funeral we chose to remember her through the photograph by Gabriella Ebano, in which she, with her smile, opens the door-window of her home. A home which over the past years was filled with young and elder people, making her happy and making it possible to her to forget about the many years in which only a few people stood on her side. "Keep your head high and your back straight", she told the young people who asked her how to fight against the mafia. She, who had attended only the elementary school, used to add: “Study, as studying you will enrich your brains and you will understand what is right and what is wrong”.

Felicia had given proof of her character already as a young woman, when she had made the decision, uncommon at her time in families liker hers, to tell her father she did not want to get married to the man he had chosen for her, and that they would not have to take her by force (i.e., like in the mores of her times, to kidnap her with the traditional "fuitina" - small escape in Sicilian dialect). Then she got married to Luigi, a fellow villager she liked, out of love, but her closeness to her husband lasted for very little. She said: "As soon as I got married the hell began". Her husband did not tell her what he did and where he went, and Felicia remembered the round-ups of the carabinieri in her home in the time of the Giuliano gang, and also mentioned a relationship with a married woman. She left home and it took her brother-in-law Cesare Manzella's, the boss, to bring peace again. That was a domestic hell that would even worsen when Peppino, after the murder of Manzella, became aware of what the mafia and the mafia gansters are about. His father was at war with his son and ousted him from home for he was an activist in a leftwing party and was more and more overtly against the mafia.

For fifteen years, from the beginning of Peppino's activity until the death of Luigi - which had occurred eight months before the assassination of her son - Felicia's life was a continuous struggle. In those years she did not only have the problem of her husband's friends. She also had to defend her son who reported local notables and mafia bosses, along with a group of young people who would stand on his side until his last day. Felicia defended her son from her husband, but also from himself. When she got to know that Peppino had written on the cyclostyled paper "The socialist idea" an article referring to the mafia as a "mountain of shit", she did everything she could to prevent it from being published.

Umberto and I met Felicia some days after Peppino's funeral. We had decided to help the comrades who were working hard to disprove the false investigative rumours on his murder that had been spread after his death. But there was something new, and it was the fact that his mother decided to bring suit as a civil party. Felicia broke the bridges with her mafia family and came into the open, because "Peppino should not be remembered as a terrorist". And she used to repeat: "I want justice, not revenge”.

Once again she had to make a radical choice: break up with her husband's relatives who suggested her not to turn to justice, not to join Peppino's comrades, not to talk with journalists. As early as only three days after the funeral, she had struck the whole village by deciding to go out, therefore breaking the usage of staying at home during the time of grief, to go to the polls and vote for her son (there were the elections to renew the city council and Peppino was a candidate for the Democrazia proletaria, in a list he had formed with his comrades).

Every time the inquiry was closed and time passed by without any outcome to her quest for justice. She also felt the ailments of her growing age. And yet she never bowed her head. In the trial against the mafia boss Badalamenti, which was held after 22 years, with the inquiry on Peppino's death closed and reopened many times thanks to the commitment of hers, Giovanni and his wife, some comrades of Peppino and the resolve of us of the Impastato Centro, she wanted to be there and she firmly accused the defendant to be the man behind her son's murder.

She said she did not want to die before justice was made for Peppino, and she achieved justice: Badalamenti was sentenced, as was his vice boss. They both died, and Felicia, to those who asked her whether she had forgiven her, answered that such heinous crimes cannot be forgiven and she would always liked Badalamenti not to go back to Cinisi even as dead. And on the day in which the envoys of the Anti-Mafia Parliamentary Commission delivered her the report clearly stating that some officers of the carabinieri and magistrates had spread false rumours to deviate the inquiry, she expressed her satisfaction by saying: "You resuscitated my son"- Her satisfaction would have been complete if she had been able to see what Badalamenti's house, which she did not want to enter despite the insistence of her husband and the friendship offers of the mafia boss and his wife, has become.

I wish to remember Umberto's valedictory tribute at Felicia's non-religious funeral: "In the leaflet we hang on the walls of Cinisi last night we wrote: Farewell, Felicia, not mother Felicia as it would have sounded more natural. This because over the past years you have not only been a wife (to a mafioso, finding yourself at a certain moment, in a situation in which you had to defend your son from the murderers) and a mother (of a revolutionary), but a woman in your own, mature in yourself, strong of a certain degree of autonomy, of a personal charisma that made any talk with you, or even just saying hallo to you, a precious and unrepeatable experience”.

Felicia left us ten years ago, but her strength, her irony, that countered the stereotypes of the grieving mater mediterranea, the lucidity of your remarks remain in the memory of those who have been friends to her, and her smile welcomes the visitors of her house, which according to her will has remained open and has become Casa Memoria. A secular sanctuary.

The sentences in inverted commas are taken from Felicia Bartolotta Impastato, La mafia in casa mia, interview by Anna Puglisi and Umberto Santino, La Luna, Palermo 1986 and reprints. This article was published in the Website of the Centro Siciliano di Documentazione "Giuseppe Impastato"