The moral and civil resistance of women 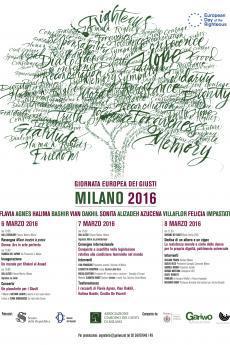 The flyer of Gariwo 6-7-8 March events

The moral and civil resistance of women for their own dignity, as a universal heritage is the theme chosen to celebrate European Day of the Righteous 2016 in Milan. In facts, all over the world there is a growing awareness of women's particular role in every field of human development.

From Africa to Asia to Latin America, we find female journalists, students, clergy, activists and political militants who even risk their lives to unmask villains and murderers, to claim equality and respect, to demand fair life and work conditions, freedom and democracy. This is a struggle that broadens from gender issues to embrace the defence of every human being. As such, it takes up a universal symbolic value and configures as the queen of all struggles.

This is why, on European Day of the Righteous 2016, Milan pays tribute to the moral and civil resistance of women through a three-day event.

Inauguration of the graffiti dedicated to Khaled al-Asaad, Palmyra's "keeper" murdered by ISIS in August 2015

Concert A Piano for the Righteous. Maestro Gaetano Liguori presents his new album. Readings by Sonia Bergamasco from texts written by this year's Righteous.

International meeting Achievements and defeats in the legislation on women's condition in the world. Remarks by Livia Pomodoro, former President of the Tribunal of Minors of Milan; Elisabetta Rosaspina, envoy of Corriere della Sera; Milena Santerini, Member of the Parliament, teacher at Università Cattolica, president of Parliamentary Alliance against Intolerance and Racism of the Council of Europe.
Pieces of testimony by Flavia Agnes, lawyer, women's rights activist in India; Halima Bashir, doctor in Darfur in favour of the women victims of violence; Vian Dakhil, Yazidi Member of the Iraqi Parliament; Cecilia De Vincenti, daughter to Azucena Villaflor

Ceremony of dedication of trees and stones in honour of Flavia Agnes, lawyer, women's rights activist in India; Halima Bashir, doctor in Darfur in favour of the women victims of violence; Vian Dakhil, Yazidi Member of the Iraqi Parliament;; Sonita Alizadeh, Afghan rapper against child brides; Azucena Villaflor, for the Madres de Plaza de Mayo; Felicia Impastato, mother to Peppino, murdered by the mafia in Palermo.

Our events are under the patronage of the Senate of the Italian Republic and the Chamber of Deputies.

Organised and curated by Gariwo on behalf of the Associazione Giardino dei Giusti di Milano, to which Gariwo belongs with Milan City Hall and UCEI.