Younger people talk about Goodness in Catania and Pozzallo 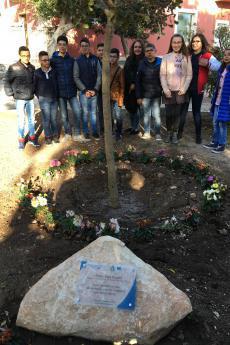 the Garden of Pozzallo

After the creation of the Gardens in Agrigento, Catania, Linguaglossa, Marineo, Milazzo and Palermo, in Sicily the Righteous are in the spotlight again.

A scouting meeting was held on 9 April in a Catania, where the scouts of the parish of  Sant’Agata al Borgo planted olive trees, laurels and pomegranate tes in the flowerbeds of Cavour square, within the project “Un Giardino delle Giuste e dei Giusti in ogni scuola” (A Garden for the Righteous Women and Men At Every School"), promoted by prof. Pina Arena on behalf of the associations Toponomastica Femminile and FNISM (which stands for National Teacher's Federation - branch of Catania), a teaching pathway dedicated to historical research and the memory of the women who have acted for Good, in favour of the whole Humanity. This idea was warmly welcome and 800 students from 21 schools have joined it, from Lampedusa to Paris, crossing the entire Sicilian region - from Catania to Siracusa, Caltanissetta, Licata (AG), Francavilla (ME), Noto (SR), Vittoria (RG), and Mazzarino (CL).

The goal is to plant trees at schools and get students to take care about them, choosing the Righteous to be honoured, and show up throughout the city with many memory corners, giving rise to what in Civita Castellana has been called as a  Spread Garden.

Along with prof. Arena's the event hosted the remarks by the Councillor to the Environment Rosario D'Agata and the Deputy president of the City Council  Sebastiano Arcidiacono, the President of Legambiente Renato Di Pietro and Gariwo Director Ulianova Radice.

The following day, which was incredibly sunny, Ulianova Radice visited the Garden of the City Hall Villa of Pozzallo, where she was greeted by Mayor Luigi Ammatuna and the whole City Government, as a testimony to the importance that this "border city", hit by the serious problem of migrants, assigns to the work of educating young people to personal responsibility, carried out through the message of the Righteous.

The meeting was attended by the School Principal Grazia Basile, the animator of the event, who on past 21 March promoted the inauguration of the carrube tree  dedicated to Father Pino Puglisi, along with numerous boys and their teachers and parents, who enthusiastically follow the work of their kids-pupils on the lives of these exemplary figures