fleeing from poverty and war 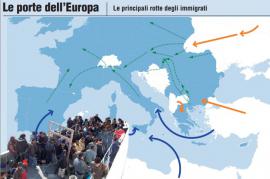 The European welfare, which Italy was entitled to enjoy according to "bloc" belonging and productive savviness of it inhabitants, but which generations of politicians were unable to harness or at least to keep, is luring to millions people who are suffering from hunger, torture and persecution worldwide.
In the hands of pitiless traffickers, who lash them, thrown them into the sea from boats which are becoming bigger as the revenues of the Mafia increase, Syrian, Eritrean, Lybian, Somali, Iraqi citizens and people from other lands ravaged by humanitarian crises often end up with shipwrecking with all their dreams and hopes.
It happened in 1996, as refugees were rescued by the brave Sicilians from Porto Palo, in 2003, then again in three most worrying cases in 2011 as British broadcasting service BBC reminded us, and this recent bloody 3 October.

Let's see first of all where they are from: above all from Africa's Horn through Lybia, which after Gheddafi is struggling to give itself new institutions ables to carry out thorough controls. Somalis flee from another collapsed State, which has already fallen pray to anarchy and criminals since 1992. Eritreans and Ethiopians are fleeing dictatorship and war.

Then there are the people who escape through Egypt, mostly coming from Syria, where chemical weapons have just been employed against the civilians, who usually reach Bulgaria to then reach the coasts of Calabria and Sicily.

From Africa and Asia going through the Middle East

Furthermore there are the Senegalese or the Gambians from Western Europe and then the mosaic of people and sufferings from the Middle East: migrants are escaping Afghanistan, Pakistan, Syria torn by civil war, and then Afghanistan and Bangladesh.

The aid in Southern Italy

In Sicily only between 1 January and 30 September 14,468 destitutes have arrived. Over the same period in Lampedusa other 11,000 arrived. Adding the numbers of those who gave reached the coasts of Calabria and Puglia they amount too 30,000, nearly all with the right of asylum by the laws and international conventions because they are persecuted. They are all exploited by the international criminal organizations, which have strengthened and now dispose of bigger ships. This all happens in the silence of Europe, the inadequacy of Italy where often are called as "heroes" those who do their duty, such as the Concordia conditions, and those who welcome aboard on their ship some people who run the risk of drowning are treated to criminals.

We hope these words won't fade into indifference and political dispute a few minutes after being told. Therefore we invite you to listen to our "video of the week", a song by Eritrean singer Tesfay Mehari who mourns his loved drowned in the Italian seas. Maybe music helps memory and awareness better than many outraged words.