Day of the Righteous in Neve Shalom

preparations go on for a celebration to be held in April 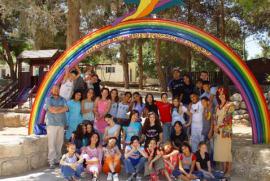 In Israel there is a small community, Neve Shalom/Wahat el Salam (Oasis of peace in Hebrew and Arabic), that initiated a Garden of the Righteous and the Israeli-Palestinian branch of Gariwo, the forest of the Righteous.

The souls of this project are professor Yair Auron, specialised on the theme of genocide cases, and the director of the local museum Dyana Shaloufi-Rizek, Christian Palestinian.

Dyana has told us in detail about her project to help the creation of a Worldwide Forest of the Righteous. On 15 January a meeting was held in her community to give rise to a series of activities that will culminate in April 2016 with a celebration of European Day of the Righteous in Neve Shalom.

"The main idea - said Dyana - is to instill the idea of the responsibility of each individual, especially in times of war and risk". Commemoration will be held particularly in honour of the "righteous and brave individuals who, all over the world, have morally resisted crimes, "holocausts", genocide, ethnic cleansing and gross persecutions".

Over the past years, in Neve Shalom, some sculptures were dedicated not only to Gariwo, which supports their project, but also to the "Palestinians who rescued Jews in the Israli-Palestinian conflict and Jews who, in the same war, rescued Palestinians".

Gabriele Nissim, Gariwo chairman, had taken part in the celebrations. Then Dyana told us that the community of Neve Shalom/Wahat el Salam is made by families who benefited of such brave rescued deeds in the past hundred years, during revolts and other gruesome episodes of Israeli-Palestinian history.

"The goal" is though of creating a site that is not only "locally sensitive", but also "universally sensitive", said Shaloufi-Rizek. This is why we need a reflection that emphasises the role of the Righteous and not the people each population deems to be their own "aggressors".

In April 2016 honours will therefore bestowed, besides on the authors of "interethnic" rescues in the Israeli-Palestinians conflict, also on Armenians who rescued Jewish lives and Turks who saved Armenian lives, with a special focus on hidden and unknown figures.