​The force of Good 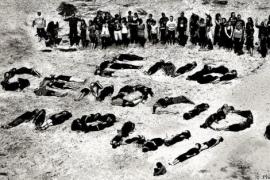 Call to act against genocide and hate crimes (Witnewyork)

On the eve of European Day of the Righteous, we publish Gariwo chairman Gabriele Nissim's editorial published on 2 March on the newspaper Avvenire (the Future).

In 2012, when I proposed the deputies of the European Parliament the resolution that would then lead to the approval of European Day of the Righteous, I had to answer two particular questions.

Some of my dearest friends in the Jewish world raised the objection that the concept of “Righteous” only concerned the Holocaust and we ought not to use this term for other genocide cases, because this would lead to trivializing the uniqueness of the extermination of Jews. Using this term for other mass crimes would lead to confusion. Thus it would be a mistake to recall the different memories on the same Day. It would be better if every particular memory (whether of the Holocaust, the Foibe mass killings or the Armenian genocide) were to be remembered in its own day, thus respecting a sort of hierarchy between the different kinds of suffering, because the memory of the Holocaust had to come first.

The second issue was the very meaning of the memory of Good. Stressing too much the importance of the Righteous would have meant to create alibis for the nations that had removed their responsibilities in the Holocaust or other mass crimes. The memory of the “good” would thus conceal the crimes of the unjust and get people to believe that face extreme evil there would be much stronger a moral resistance than there had actually been.

My answer to the first objection was that the memory of the Holocaust, the most savage extermination, acquired a meaning only if it became a warning to the entire humanity to prevent every form of genocide, be it against the Jews or non Jews. Precisely from the reflection about that tragic experience the category of the Righteous was identified – the people who had bravely tried to push history into a different direction. Searching and bringing about such figures in any genocide could thus offer younger generations some extraordinary moral examples of a dignified behaviour.

It would have been shortsighted and reductive to exclude from this memory the rescuers who had helped the Armenians in the Ottoman Empire, the Tutsies in Rwanda, or Cambodians in the Gulags of Pol Pot. “Righteous” was not only the non Jew who rescued Jews, but every person who went to the rescue of a fellow human being.

After some oppositions and misunderstandings, my proposal was eventually welcome in Israel by some of the most important Holocaust scholars such as the great historian Yehuda Bauer and professor Yair Auron.

Thus, last year in November a great conference was held at the Open University in Raanana (Israel), where both professors, remembering the twentieth anniversari of the Rwandan genocide, underlined that in Israel people ran the risk of making a big mistake by splitting Holocaust memory from the memory of the other genocide cases. The younger generations in Israel would thus be educated in a distorted way if they were taught that evil in history was only the one that had befallen the Jews. Thus it was decided not only to celebrate the European day of the Righteous in the same university, but also to inaugurate, on 10 March, in the village of Neve Shalom a memorial that, besides the famous one in Yad Vashem, remembers also the Righteous in other genocide cases.

The second objection, that the memory of Good can dim the one of evil, is instead the deepest-rooted one, even though it is never overtly expressed.

This fear of speaking about Good is also based on a pessimistic view of the human condition, that ultimately denies human beings the prerogative of being the makers of their own destiny.

It almost seems as if evil were the prevailing feature in human nature and people are condemned to be only eternal sinners. Thus they must be steadily called to admitting their own guilt and they seem to be free only so far as, and in the span of control in which, they repent. So, way too often during Holocaust Remembrance Days young people are passed on a negative message: they have to set free from the guilts of their fathers by remembering horror, but they are not taught how every man with his free will can push history into a different direction. This is why the theme of the Righteous is confined in the background, because repentment must prevail. This way we do not understand that we deprive young people of the taste for freedom and responsibility.

Instead, bringing about the good examples in the gloomiest times of humanity, far from creating alibis for the unjust, becomes a stimulus to emulate them face the challenges of the present day: the tales of the Righteous make us understand how the outcome of history can never be taken for granted, because single individuals, then as well as now, can always make the difference.

Russian Jewish writer Vasilij Grossman, who was witness to the biggest mass atrocities of the Twentieth century, such as famine in the Ukraine, the extermination of the Russian Jews, and Stalin’s Gulags, wrote in Life and destiny that despite all their efforts, villains did not succeed in changing human nature, because those behaviours that he defined as deeds of “senseless goodness” showed how the core of human beings cannot be annihilated by the totalitarian regimes. His statements were so surprising, if we think that the writer had not only suffered from the loss of his mothers in the hands of Nazis, but had also been targeted by the Stalinist anti-Semitic campain and his manuscripts had been seized because they denounced the Gulag system. Grossman lived on in a seemingly helpless world, but he bore witness to the force of humanity, because he was aware that, although there were only few flickers of light, the human being would have the strength to resurrect and deliver himself from the grip of lager and totalitarianism.

Grossman was paradoxically optimist because he thought that the genocide cases, which he had been a witness to, were not impossible to understand, but were the product of human choices which would meet with the resistance of the best people.

Grossman’s lesson is still valid today, when we look at the events in the Arab and Muslim world. Once again a catastrophic vision of the world prevails, as if it were ineluctable that IS and murderous fundamentalism could win on all fronts, to the point that they may threaten some Arab and Muslim leaders who sometimes do not even understand that they could become the main victims of this fundamentalist wave. Others even put forward an indifferent attitude and contend that we are not concerned with the problem and the Arabs must solve this situation by themselves. It is as if, in the face of Nazism, it had been considered right to say that the Jews (as unfortunately was said too many times) had to be abandoned to their own destiny.

This is why we have chosen to dedicate this third annual EU day of the Righteous to the search and promotion of the Arab and Muslim resistants who stem the climate of terror. Much has been said in France about the tale of Ahmed Merabet, the Muslim policeman who died for defending the Hebdo editorial staff, and Lassana Bathily, the clerk who did everything in his power to hide the Jews in the kosher market, but there are many more stories of resistance against the most savage crimes that occur in Libya, Syria and Irak.

This is why in the Garden of the Righteous of Milan, which has become the moral capital of this Day in Europe, we will plant trees in honor to remember young Syrian pacifist Ghayath Mattar, assassinated for his struggle for non-violence, and Razan Zaitouneh, the young Syrian activist, Sacharov Prize laureate in the European Parliament who was abducted by fundamentalists in 2013 and whose whereabouts are still unknown.

Furthermore we will remember Mehmet Gelal Bey, the mayor of Aleppo who was one of the few Muslims in the Ottoman Empire to oppose the Armenian genocide. His example today is very meaningful in the face of the massacres and the threats against Christians that occur in the Middle East.

It is a strong signal of the fact that we will not leave today’s Righteous alone and also in the Arab and Muslim world jihadist totalitarianism, as Grossman would put it, will not succeed in changing human nature.