Brussels' commitment to support EU Day of the Righteous 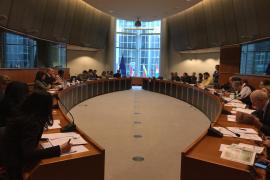 The room at the European Parliament

The meeting at the European Parliament in Brussels, The Righteous and the values of European identity, marked the conclusion, for this year, of the celebrations of the third European Day of the Righteous, which this year are dedicated to the theme of resistance against fundamentalism and terrorism.

“After the Paris attacks -said Gariwo's chairman Gabriele Nissim -, the assault to the Parliament of Tunis and the Bardo Museum compels us not to leave alone those who, in the Arab and Muslim world, refuse fanaticism and terrorism, like Syrian activist Razan Zaitouneh, abducted in 2013. Today we demand the European Parliament to support our call for the release of this woman, symbol of the struggle against obscurantism in the Arab world, and to keep remembering all the Righteous who all over the world are still struggling for freedom and peace”.
Razan's sister, Rana, has already launched this call together with Gariwo in the great ceremony at the Garden of the Righteous in Monte Stella Hill, on 6 March in Milan, in the presence of the institutions, the Righteous and their relatives, hundreds of students and citizens.

Gariwo's chairman urged the European Parliament to emphasize through renewed political action the commitment taken in the preceding legislative term by establishing the European Day of the Righteous. Nissim also expressed the wish that the European Commission is involved in this mission and exhorted all MEPs to spread the celebration of this Day in their countries and, in particular, he urged the Italian MEPs to become the promoters, like in 2012, of this endeavour in Brussels.

Hon. Patrizia Toia, who organized the event, will engage in making sure that the memory of the RIghteous becomes an institutional event within the European Parliament.
Sylvie Guillaume, Deputy-president of the European Parliament, Giuditta Giorgio, of Italy's permanent delegation to the EU, Hon. Cecile Kyenge also accepted Nissim's invitation to make sure that EU Day of the Righteous becomes a key part of the calendar of the Union's annual celebrations. The proposal was warmly welcome by all participants and in particular by Enrico Petrocelli, member of the cabinet of the High Representative of the Union for Foreign Affairs and Security Policy Federica Mogherini, and by Nicolas Tavitian director of AGBU Europe, non profit association that promotes the Armenian culture and identity.

So are closed the celebrations of 6 March, which saw the participation of numerous Italian towns, first of all Milan, with the ceremony at Monte Stella Hill and the meeting in Palazzo Cusani with the Secretary General of the Foreign Ministry Michele Valensise, the director of the Corriere della Sera Ferruccio de Bortoli and Gabriele Nissim, which is moderated by Corriere della Sera editorialist Antonio Ferrari - and initiatives in Germany, the Czech Republic, Poland, Bosnia, Rwanda and Israel, where the Garden of the Righteous of Neve Shalom was inaugurated.

Once again the Day of the Righteous confirmed to be a key date for the values of democracy, solidarity and personal responsibility.

European Day of the Righteous in Prague