The Righteous in my homeland 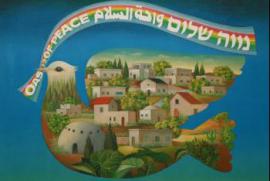 The logo of Neve Shalom

Dyana Shaloufi Rizek is one of the people in charge of the Neve Shalom - Wahat el Salam ("Oasis of peace") community, an Israeli village inhabited by Palestinian Arabs and Israeli Jews who on 10 March will celebrate the first International Day of the Righteous of all mass atrocities with an initiative supported by Gariwo and the Israeli professor Yair Auron. On this Day, in the presence of Gariwo founders Gabriele Nissim and Pietro Kuciukian, trees will be planted in honor of the Armenians who saved Jews during the Holocaust, the rescuers in the Rwanda genocide and the Israeli Jewish and Palestinian Arab Righteous. We are honored to publish her reflection The Righteous in my homeland.

Much has been written about the conflict in our homeland between the Zionist Jews and the Palestinian Arabs.

But no matter how much has been written or said we still do not know the whole story and we will never know. Partly as a result of the fact that much more information still has to be revealed and partly since our stories about what had happened and what took place can never be objective.

Our small village Wahat Salam~Neve Shalom has been showing for many years now through its existence and through its work that a much more humane relation is possible between our two peoples.

With this spirit we decided to shed more light on the story of those people who took a different approach when violence broke out whither it was in our region or others.

We are talking about those people who made the choice of helping and saving others rather than choosing passivity or taking part in the act of violence.

We are talking about those people who took this choice in spite of the risk that could come with it regarding their personal lives and the lives of their families – The Righteous.

The Zionist movement has worked hard to deny the fact that there is Palestinian people in this land and Palestinians started to deny the connection of the Jews in the same piece of land. Although there were other voices to bridge the conflict but victims began to fall down from both sides and Righteous began to take part which lasts to this day.

A difficult period began, almost 100 years till now, and more stories of the brave rescuers became to be more important. But usually this phenomenon will not give its importance of the two sides media.

When I opened the door, heroic humanitarian interesting and inspiring stories appeared in front of me and it's just the beginning.As a matter of fact, there are certain events which has been documented but there are many that have not. This subject needs more Support to those who would assume to continue documenting or even start.

Any harm to others is to harm oneself and any good thing to do has a good effect on the universe and oneself. There is Place to exceed the difficulties, fears and denial.

Study of Rescuers will give a new realization that holds us as human beings in this land and all.