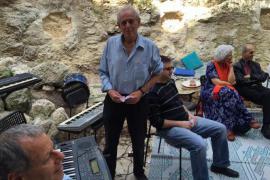 Yair Auron at the Ceremony in Neve Shalom

In March 9th 2015 for the first time in Israel, a seminar was taking place in The Open University under the title: Rescuers in genocide and humanitarian disasters human made.

Prof. Yair Auron from The Open University exposed for the first time, the rescue acts of the residents of Circassian-Muslim village, Besleney, in the Caucasus Mountains, which had saved the lives of 32 Jewish orphans from the Nazis during World War II.

Mr. Gabriele Nissim, the chairman of Gariwo, Gardens of the Righteous Worldwide Committee, introduced the organization and its activities. He also spoke about the educational value as a model for human behavior, influenced by several philosophers like: Seneca, Immanuel Kant, and Baruch Spinoza. He also spoke about his book on Moshe Bejski who was an Israeli judge and was the President of "Yad Vashem" 'Righteous among the Nations Commission'.

Dr. Hilel Cohen and Dr. Ron Dudai from the Hebrew University spoke about acts of rescue during the Israeli- Palestinian conflict: memory, repression of the Palestinian rescue acts in the Zionist historiography and in the Israeli collective memory, and about reconciliation.

Mr. Pietro Kuciukian, co-founder of "Gariwo", Gardens of the Righteous Worldwide Committee, spoke about acts of rescue during the Armenian genocide, especially Turks who saved Armenians. He also mentioned the difficulties Armenians encounter nowadays in order to commemorate the acts of these Turkish rescuers, which caused by the fact they came from the same nation of the genocide perpetrators. In addition, He spoke about the noble people who tried to stop the Armenian genocide and helped spread information to the free world about it, such as: Fridtjof Nansen, Henry Morgenthau, Armin Theophil Wegner and Franz Werfel.

In March 10th 2015, In "Wahat al-Salam - Neve Shalom" museum the opening event of the Israeli branch of "Gariwo" was taking place, The Gardens of Righteous Worldwide, in remembrance of the Righteous.

Wahat al-Salam – Neve Shalom (WAS-NS) is a village in Israel of Jews and Palestinian arabs of Israeli citizenship. Situated equidistant from Jerusalem and Tel Aviv-Jaffa, WAS-NS was founded in the early 1970s on land originally leased from the adjacent Latrun Monastery. By 2009, 55 families had come to live in the village, with an equal number of Jews and Arabs. Eventually the village will include about 140 homes.

The members of WAS-NS are demonstrating the possibility of coexistence between Jews and Palestinians by developing a community based on mutual acceptance, respect and cooperation. Democratically governed and owned by its members, the community is not affiliated to its vision through various branches.

In the village active among others are bilingual, binational schooling, the school for peace and Doumia-Sakina – The pluralistic spiritual center.

Dyana Shaloufi Rizek & Dafna Karta Schwartz from "Wahat al-Salam - Neve Shalom" ,spoke about the village, which is an oasis of co-existence between Israelis and Palestinians.

Prof. Yair Auron spoke about the opening of the Israeli branch of "Gariwo" The Gardens of Righteous Worldwide.

Mr. Gabriele Nissim spoke about the European day of the Righteous in March 6th. This day was established in 2012 by the European Parliament.

Mr. Pietro Kuciukian spoke about rescuers during the Armenian genocide such as "Nili" espionage network which assisted Britain to fight against the Ottoman Empire during World War I, in which Aaron Aaronsohn and his sister Sarah were members. The network members also provided information about the Armenian genocide to the British which distribute it in the free world; he also mentioned the "Nili" museum in Zikhron Ya'akov.

In this ceremony, two memorial monuments were placed in order to commemorate the Palestinian and Jewish rescuers during the Israeli-Palestinian conflict.

This text is written in the entrance of the Righteous part of the Museum – Gallery and Archive of the village:

There are those who, during dark periods of manmade humanitarian disasters, ethnic cleansing and genocide, did not succumb to the popular current. They were able to view reality with their own eyes and bravely acted to save lives.

Their stories will cast light upon our own life and times.

Replete with moral and educational values, these stories provide a model to be emulated. We have chosen to turn them into a living memory that educates and creates an awareness that can shape our experience.

Yair Auron, author of "The Holocaust, the Resurrection and the Nakba", Winner of Armenia Peace Prize and Professor at Open University in Ra'anana