“When I first heard of Gariwo, I thought: ‘Knock at the door, and it will be opened’" 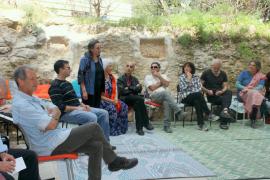 Dyana Shaloufi Rizek is in charge of the Museum of Neve Shalom-Wahat Salam WASNS, a cooperative village inhabited byJews and Palestinian Arabs, all Israeli citizens,where celebrations for 6 March, European Day of the Righteous, were held on 10 March for the first time in Israel. We interviewed her about her activity to promote the example of the rescuers in the Israeli-Palestinians conflict, how the people in her community responded to Gariwo’s initiative and her message to stop the war.

Will you introduce yourself?

Sabâh-al-khàiri, buongiorno, good morning. My name is Dyana Shaloufi Rizek. I am originally from Nazareth, where my family has lived for almost 500 years. They come from the nearby areas where there were no borders like today. I know there was this unique place, Wahat el Salam – Neve Shalom, since I was a student at the end of the Seventies but I came to stay here with my husband in 1984 where two wonderful boys were born to us and now they returned to live in the village.

Would you describe your activity?

Actually I am an educator. In the last three years me and my colleague Dafna with a German friend’s support started the museum project at our WASNS village. of Neve Shalom. It started slowly, step by step. At the Museum~Gallery and Archive we also decided to present ways of life, thoughts and ideas that will promote our common humanity. When last year prof. Yair Auron, our village member, toldus about the Righteous, all over the world, I agreed to do something in our Museum because I thought it was a perfect idea for us here. These people who perform very humanistic deeds did something huge, and prof. Auron and Gariwo were researching this field for many years, then I started to be involved in studying this field, so I thought and had this feeling: “Knock and the door will be opened”.

How you would describe the meeting of 10 March? How did people of Neve Shalom react?

We hosted Gabriele Nissim, Piero Kuciukian from the "Gariwo" who enriched us of what they have brought and of there knowledge.Yair Auron shared us about some of his studies and his adventures, Shay Wineapple mentioned family names of righteous, and others just came to be with us. Some came from our village, all ages was presented and it was unique.

A small gathering took place outside the Museum while inside there was an art work of two artists. We honored the Righteous from all over the world, it was an important event. Some talked about real stories, others understood that it’s about time we addressed the Righteous, although there were voices to say it's not time to mention the Righteous between our two nations because of the ongoing and unbalanced political conflict.

It was adorable, we had two groups from the school, with their musical instruments, and others kept coming to visit us and see the sculptures and some mad drowings. Auron kept in contact with the school managment, parents committee and teachers, concerning the rescuers.

Will you tell us some stories of Righteous people?

When I started studying this topic I realized that in our small village live many people who know someone or a familly who have rescued or have been rescued. People started to tell their stories. I will mention only a few stories from people who live here, but there are many more. Boaz, from the "Bereaved Families" forhom, a Jewish guy whose family lived in Hebron until 1929. In August that year, the Palestinians heard about a story that in Tel Aviv 6,000 Jews had a demonstration crying: “The Wall is ours!” and they were talking about the Wall in Jerusalem. There is a conflict between Jews and Moslems concerning religions . This belongs to their. So the Palestinians went out for another demonstration in Jerusalem, there was a confrontation between both sides in many cities including Hebron. Palestinians who came from several nearby villages tried to take out the Jews from Hebron and it was a massacre. 67 Jews were killed but other Palestinian families helped other Jews and Boaz familly was rescued.

Dafna talked about the same event but in Jerusalem, while Palestinians wanted to kill Jews and other Palestinians righteous saved Dafna's Family.

Here we realized that also Jews helps Palestinians. A guy who lives in WASNS, and is the head of the Educational Committee at WASNS, is a nephew to a woman from Lud city, her name is Georgette who was in here eighth month pregnant when ,, in 1948 Jewish soldiers came and made some massacre to kick out the Palestinians from thereto Jordan. On the border there was a Jewish soldier who in a very “humanistic” moment that soldier looked at her and sayed: “You can go back” he helped her with her husband and kids to go back to Lud. She came back to her house. Well, actually not to her house, because she was not allowed to enter any house, but she could survive.

The researcher Dr. Maram Masarwi who worked on the history of the village who her family came from, a village that now doesn’t exist anymore – Sedna Abu Ali. there was a Jewish man who helped her grandfather with his family continue to live in his house and not be killed or forced to leave Palestine Until he was forced to leave because of the war.

Wen the war stoped, usually refugees want to come back, but for the Israely government they cannot come back because "they are not citizens anymore" but infiltrators.That Jewish man, Naftali, helped by providing them an Israeli ID so they could live in Taybeh city. We have some more such unique stories.

What is your message for European Day of the Righteous?

I want to say that all these people who did humanistic gestures, whose value is shining until today. People or media often don’t mention this kind of humanitarian work. The first time I heard that Gariwo honors the Righteous all over the world I wanted to give you all a big hug because we have only one planet to live together and to be much more humanistic. Even if many are living under occupation and it’s not a symmetric thing here, and so on, still we need those stories in order to survive and in order to say that we are one.