Special Event at the Museum of Neve Shalom 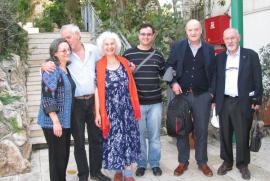 We receive and publish Dyana Rizek's article about her experience at hosting the Ceremony for European Day of the Righteous in the cooperative village of Neve Shalom, inhabited by Palestinian Arabs and Jews, all Israeli citizens, to honor the rescuers in the Palestinian-Israeli conflict.

On Tuesday, March 10, the event, "Honoring the Righteous" took place in the world’s only community of Palestinian Arabs and Jews, all Israeli citizens, who have chosen to live together, thanks to a shared belief that equality, reconciliation and respect are possible between all the inhabitants of Israel / Palestine.

This was the first event of Wahat al-Salam Neve Shalom’s new Museum / Gallery & Archive, which is being established as a vehicle to present ways of life, thoughts and ideas that promote our common humanity.

Some 50 people from the community, as well as specially invited guests, gathered in the Museum courtyard for the program, whose special theme was “to highlight the important role of the righteous, the rescuers, during situations of humanitarian disasters, ethnic cleansing or genocide.” The Museum’s acting director, Dyana Shalufi Rizek with her colleagues, wrote in the program invitation that “the issue has enormous moral educational value, because alongside all of the bad memories of such events, it is crucial to give expression to this positive memory and to preserve it as a model for human behavior in the future.”

A key speaker was Prof. Yair Auron, who first raised the idea for the event, based on his research of genocide and humanitarian disasters. [1] Auron was also instrumental in bringing the guest speakers, including Mr. Gabriele Nissim and Mr. Pietro Kuciukian, the co-founders of “Gariwo, the Gardens of the Righteous Worldwide" association.

The declared intent of Gariwo is:

“To recall the attempts to stop the extermination of the Armenians in Turkey in 1915 and by extension to recall all those, anywhere in the world, who have tried or are trying to prevent crimes of genocide, to defend human rights - first of all human dignity - in extreme situations, or that struggle to safeguard memory from the recurring attempts to deny the truth about the persecutions.”

Prof. Auron, in his presentation, brought a few salient illustrations of this theme from around the world, based on his current research for a book on the subject.

Mr. Nissim and Mr. Kuciukian both spoke of the ideas behind Gariwo and especially of the urgency and necessity that had prompted them to create the association.

The words of the speakers struck a chord among the audience, some of whom had their own stories, which related more particularly to the Palestinian – Israeli conflict. For example, community member Boaz Kitain told of how his own grandmother had been saved from an angry mob by Palestinian neighbours during the 1929 riots in Hebron.

On behalf of the association of educational institutions, Adnan Manaa said that the “Honoring the Righteous” event had the full support of the community.

The occasion was not composed solely of speeches. It opened with an instrumental and vocal performance by the primary school children. A smaller group of children from the primary school later provided another musical interlude in a very professional manner.

The Museum Gallery itself featured a special exhibit of sculptures by Palestinian artist Nihad Dabeet from the city of Ramleh, which he calls, "Flashes with iron wires". The exhibit gave an artistic dimension to the program.

In order to make the artistic creation more participatory, pupils from the primary school, together with teachers and guests, came to draw the statues on display. The artist permitted the sculptures to remain on exhibition for a few days so that others could enjoy them.

Another exhibit, "Sculptures in the process of creation", is being specially produced for the "Honoring the Righteous" motif by Jewish artist Aharon Adni of nearby Kibbutz Nachshon, and these will be permanently displayed.

A special charm of the event was the way in which it spoke to, and was well received by a multi-aged group – from school children, to teens from the youth club, to adults in the prime of life, to older community members and guests.

The speeches we heard created resonances that remain with us. Said Gabriele Nissim:

“The ’righteous’, although a word that appears in the Jewish Bible, expresses an idea that is universal. You can find it used everywhere, by Socrates, Seneca, Kant, Spinoza and others of many different religions. There is no copyright upon it – it belongs to humanity. Why do some men act righteously? Because it feels better to save another. There is no political motivation. You simply cannot bear to look at yourself unless you do so. We can perform many small things to save the world. Every human being can take care of others, of those outside of their small circle. The righteous can give an example of something different. We can educate our children in this way. We cannot wait for peace in order to be humane. This will never happen. What will happen is the peace that we construct now. We cannot wait until the end of the struggle, or wait for someone else to act first. Really you are doing something very important here. You may have no idea how important it is. Moral actions can change history, so it is a miracle what we are doing here today. I am inspired by the children because they give hope for the future.”

Nissim also told about the organization’s contribution in influencing the European Parliament’s ’s 2012 decision to create an annual Day of the Righteous (March 6). He pointed out that there still remain many righteous persons whose actions remain unknown, and that it was a goal of his organization to gather their stories and bring these to light.

Mr. Pietro Kuciukian spoke about rescuers during the Armenian genocide such as "Nili" espionage network which assisted Britain to fight against the Ottoman Empire during World War I. Two Jews of mandatory Palestine, Aaron Aaronsohn and his sister Sarah were "Nili" members. Their network provided information about the Armenian genocide to the British which distribute it in the free world. Kuciukian mentioned the "Nili" museum in the Israeli town Zikhron Ya’akov.

The stated goals of Gariwo fit closely with the goals of the Museum to document the history of, and narratives from, Palestine and Israel, while providing inspiration for ways forward that can lead us to a humane and just resolution to the regional conflict. The Museum – Gallery will highlight the evolution of Wahat al-Salam Neve Shalom itself as a positive example of what is possible despite the obstacles constantly thrown up by the continuing injustices and harsh politics in the land.

Our quest involves much soul searching within the community itself, as we try to cope with impossible questions such as military conscription of our young people, and how, as community members we deal with our own responsibility not to keep silent while terrible crimes against humanity are committed all around us, both locally and, as Yair Auron reminded us, around the world.

The point of the “Honoring the Righteous” event and of the museum itself, is therefore not only to place the achievements of the village on display, but to keep alive a constant dialogue with the difficult realities in which we continue to live.

Dyana and Dafna, in describing the Museum / Gallery & Archive, say:

“Our hope is to present ways of life, thoughts and ideas that promote our common humanity. [3] "

In establishing the Museum / Gallery & Archive, special thanks are due to the German Friends of Neve Shalom / Wahat al-Salam for their constant support in this project. Particular appreciation is due to Mr. Reuven Moskovitch who accompanied the idea from its inception and helped to raise funds for it, especially in Germany.