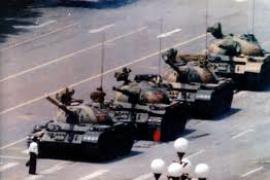 The brave student facing tanks all alone (picture by 64Memo.com)

On 4 June 1989 the Chinese Communist Party cracked down heavily on the peaceful student demonstrations that were taking place in Tiananmen square to demand democracy and human rights.
Every year since then, whether from house arrest, jail or labour camp, Peace Nobel laureate Liu Xiaobo has written a poem in honour of the victims of the deadly clampdown. Here's an example of his poetry:


Even if I know
death's a mysterious unknown
being alive, there's no way to experience death
and once dead
cannot experience death again
yet I'm still
hovering within death
a hovering in drowning . . .

The founder of Charter 08, who is serving a 11-year jail term for his pro-democratic activism, published a book with these poems, Elegies of Fourth June. In it he expresses his human and political ideas, his sense of guilt for being unable to rescue the people killed or maimed in the repression, and his awareness of struggling against an "inhumane power".

In China this topic is taboo. Even people who still report serious injuries inflicted by the Chinese police are compelled to find excuses with their younger relatives if they ask them to explain the reasons why they are crippled. Even poets have to find a way out censorship.