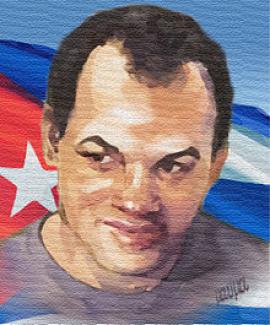 La Havana refused to allow the expatriation of Guillermo Farinas, the activist whose hunger strikes led to the release of 52 political prisoners. Empty chair in Strasbourg, where Farinas was awaited for delivery of the Sakharov prize. Two empty chairs have been left this week at important international ceremonies: the one for Liu Xiaobo, the Chinese signatory of Charter '08, and now this further proof of the indifference of Communist regimes towards human rights.

Guillermo Farinas is 48, he is a doctor specialized in Psychology, known for his journalistic and civicl commitment. He served longer than 11 years a jail sentence and ran at least 23 hunger strikes. Last February Farinas started fasting to protest against the death of dissident Orlando Zapata and ask for the political prisoners' release. His protest lasted for 135 days and was only interrupted when the Catholic Church announced that the Government would release 52 conscience prisoners.

"It is not an award for Guillermo Farinas" - the dissident said in his Santa Clara house, 270 km away from Havana - "but for the whole Cuban people, which has been struggling to overcome dictatorship for 50 years. We, the peaceful opponents, are the movement's most visible face".

The activist declared he is ready to defy the Government again: "I want to go to Europe" to receive the Prize, he said. "Let's see if they are going to let me go". Farinas doesn't exclude fasting again unless Raoul Castro lets him reach Strasbourg.

It's the third time that the Sakharov Prize is awarded to a representative of the Cuban opposition: in 2002 the important recognition was given to activist Oswaldo Payà and in 2005 to the Damas de blanco. a movement gathering all relatives of the political prisoners detained in the island's jails.

See the links in the box below with more information