and the winners who did not receive the award 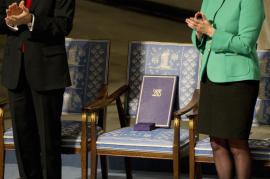 The world is to celebrate the delivery of the Peace Nobel Prize. The winner, Chinese dissident Liu Xiaobo, is in jail and nobody will receive the award on his behalf. This is why the organizing Committee decided to leave an empty chair in the room, as a symbol of protest against his imprisonment.

It has already occurred that the Nobel Peace Prize was not awarded. It was the case of German pacifist and journalist +Carl von Ossietzky, in 1935.
When he won the Prize the Nazi authorities refused to free him from the Sonnenburg lager where he was interned. The prize could not be delivered because the German government refused to accept all kinds of recognitions to nationals. The king of Norway did not attend the ceremony.

THE WINNERS WHO DID NOT RECEIVE THE PRIZE

Some Nobel laureates did not attend the ceremony:

Aung San Suu Kyi
Burma's Aung San Suu Kyi was awarded the Nobel Peace Prize in 1991, a year after her National League for Democracy won an overwhelming victory in elections - a vote that was nullified by the junta. At the time of her award, she was under house arrest and heard the news on the BBC. "It had something to do with me obviously, and yet it seemed to have nothing to do with me because it was so distant," she told BBC World Service. She says the award "heartened" her supporters at a difficult time. Her son Alexander Aris attended the ceremony in Oslo in her place, and made a speech on her behalf. Aung San Suu Kyi was released last month after spending most of the last 20 years in detention. She told the BBC she would like to "hold out a hand of sympathy" to Liu Xiaobo, and she said it was "very sad" that his chair would be empty at Friday's award ceremony.

Lech Wałȩsa
The Polish trade union leader and later president, Lech Wałȩsa, was awarded the Nobel Peace Prize in 1983 for his peaceful opposition to Communism. He was one of the founding members of Solidarity, and spearheaded the East European anti-Communist movement. Lech Wałȩsa decided not to attend the ceremony in Oslo for fear that he would not be allowed back into Poland. His wife and eldest son went in his place. In 1981, Mr Wałȩsa had been arrested and later released as part of an anti-democracy crackdown. His son Jaroslaw Wałȩsa told BBC World Service that his father's award was a "tremendous help" to Poland and came at a time when "belief in peaceful change was just dissolving". In 1984 Solidarity was legalised, and in 1990 Lech Wałȩsa was elected president of Poland, a post he held for five years. Mr Wałȩsa offered to collect the award for this year's Nobel Peace Prize winner Liu Xiaobo in his absence.


Andrej Sakharov
In 1975, nuclear physicist and human rights activist Andrei Sakharov became the first Soviet citizen to be awarded the Nobel Peace Prize. His work in the 1950s helped lead to the creation of the first hydrogen bomb. Then in the 1960s and 1970s he became politically active, calling for drastic reductions in nuclear arms and co-founding the Moscow Human Rights Committee. Soviet authorities did not allow Mr Sakharov to travel to Oslo to collect the award. His wife Yelena Bonner, who went to Oslo in his place, described it as, "a great emotional burden; a pleasing and important task from my husband". She told BBC World Service that the award helped focus international attention on the situation in the Soviet Union, and especially those referred to at the time as "dissidents". Andrei Sakharov died in 1989. The Sakharov Prize for Freedom of Thought is awarded annually by the European Parliament to individuals working on human rights.

See the biographies of Lech Wałȩsa and Andrej Sakharov, and an addition link in the box below