no one will represent the laureate 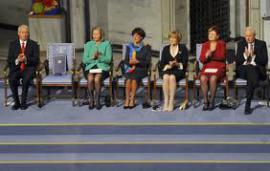 The empty chairs during the ceremony

It will impossible to bestow the Peace Nobel Prize on its winner: on 10 December in Oslo no one will be able to receive the medal and the 1,5 million dollar grant won by the signatory of Charta '08 Liu Xiaobo. The dissident's place will be left empty to denounce the serious behaviour of the Beijing government which detains him.

Liu Xiaobo was not allowed to receive the prize and the visa was denied also to his relatives. Since last 8 October he has been under house arrest. Over the past few days his brothers were held, too.

Beijing threatened "trade retaliations" against the Countries which will take part in the Ceremony. Five nations already yielded to the blackmail: Russia, Iraq, Morocco, Kazakhstan and Cuba, while 16 more nations did not even reply to the invitation.