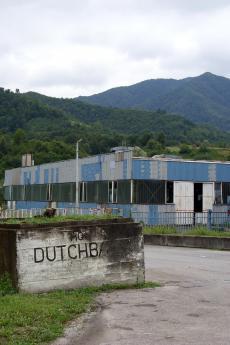 The Dutchbat, headquarters of the Dutch Batallion in Srebrenica (Wikimedia commons)

The Dutch government has decided to fund the restyling of the old factory of accumulators which from 1993 to 1995 was the base of Dutchbat, the batallion of Dutch blue helmets which would have had to protect the Muslim enclave during the war in Bosnia.

The government project provides to turn the restored building into a Memorial that will host a permanent exhibition “on the international presence in Srebrenica between 1993 and 1995", that is to say the period when the Dutch peacekeeping troops failed to prevent the massacre of 8,000 Bosniak boys and men by the hands of the Serb-Bosnian troops of General Ratko Mladić in the occupied town, on 11 July1995.

Today, nearly 20 years after genocide, the Dutch authorities decided for the first time to collect also the testimonies of the Dutch soldiers who, as the project plan reads out, deem their own stories as indespensable for a “complete reconstruction” of what happened in Srebrenica.

The response of genocide survivors arrived quite promptly. Although several Dutch veterans regularly go back to those places and keep ties with the victims’ relatives, many fear that the attempt to create a “shared narrative” about the bloodshed can lead to the rehabilitation of the deeds performed by the Dutch blue helmets. "We have not seen all elements of the plan, yet”- said Munira Subašić of the association Mothers from the enclaves of Srebrenica and Žepa to OsservatorioBalcani e Caucaso - "but if it has to be a pretext for even just a partial praise of the deeds by Karremans [the commander of the Dutch contingent Editor’s note], the blue helmets or the Dutch government, we cannot support it in any way. We are eager to cooperate, sure, but this does not deprive the victims of their right to be the sole controllers of the future accomplishment of the plan ".

The pathway to the project realization, as could be easily expected, starts as a slippery slope. It is true, as the experts of the Pax centre, the main curator of the exhibition, underlined, that the massacre was a catastrophe also for Holland and the country has always committed to keeping the memory of the Srebrenica events alive – starting from the sum invested in the realization of the Potočari memorial. But it is at least as true that the Dutch soldiers are responsible for letting 300 guys and men out of its building, where they had found shelter, which actually on that 11 July 1995 handed them to their executioners. The discovery in 2007 of a mass grave in the Dutch compound and the recent verdict with which the Hague found the Netherlands “liable” for the death of hundreds Bosnian Muslims, have embittered more and more the relationships between Holland and Srebrenica. A generous act of understanding and listening will be necessary to reopen the dialogue between veterans and survivors and share again their commitments towards reconciliation and justice.