Nikolic and the apology "on his knees" for Srebrenica

admission of guilt or tactics? 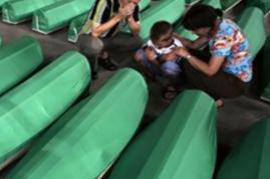 A week after the normalization of relations with Kosovo, Serbian President Tomislav Nikolic "takes a new step forward, even more important," according to the French newspaper Le Monde.

In fact, on April 25 in an interview traspassed through the Bosnian BHT, Nikolic asked "forgiveness for Srebrenica " - the massacre that took place on the 11the of July in 1995 when the army and Serb paramilitaries killed 8,000 Bosnian Muslims. "I apologize for everything that has been committed in the name of our state and our people by members of our people," said the leader of Serbia.

However, the gesture has not appeased the controversy. First of all Nikolic has avoided to talk mention the word "genocide", although this term is now officially adopted by the Hague tribunal. He admitted the genocide, in a somewhat ‘generic’ and inaccurate way, touching everything what happened, but did not go deep into the problem of the Genocide in former Yugoslavia. But for the critics, he made only one little step forward for admitting the wrongdoings of Serbs.

Relatives of the victims said they were "not yet convinced of the sincerity" of the President Nikolic. The President of the Associazone Munira Subasic said: "we want to see that Serbia recognizes the international verdicts and that Nikolic pronounces the word genocide." The Bosnian state has not responded officially to the outstretched hand of the President of Serbia.

The political scientist Bosko Kaksic in the newspaper Le Monde emphasizes that the gesture of "good will" is intended more to the European Union than to the neighbors, but maybe in the long run this step will be benefitial for the area, which is still characterized as tense.