it was destroyed at the end of August 1992 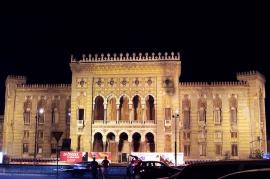 The worst siege since World War II, the one of the Bosnian capital in the terrible years of the dissolution of the former Yugoslavia, also caused the destruction of the National Library.


Under those circumstances, in which very ancient books and incunabola were set on fire, Bosnian poet Goran Simic dreamt that the great literary characters, such as Werther and Raskolnikov, would live again in the old palace.


Now his dream has come true: after 4 years of restoration, the imposing Austro-Hungarian building has come back to its ancient splendour. Many texts have been destroyed, but the restoration almost represents "a victory of civilization over savagery", writes Osservatorio Balcani.


The Vijecnica, as the Library is called in Sarajevo, guards not only the books, but also the memory and history of Bosnia and its people. It was also the last place to be seen by the Austro-Hungarian couple before Francis Ferdinand was killed by Gavrilo Princip in 1914.


There is room for hope that it undergoes a different fate from the National Museum of Bosnia, which shut its doors because, as the experts interviewed by Osservatorio Balcani think, in the Country the approach towards common goods without ethnicity is still hostile in the country, there is no fund allocation for them nor even the creation of a Ministry of Culture in charge of creating synergies between museums and universities.


Political and social difficulties also make it difficult to create the Garden of the Righteous in Sarajevo, the project that Gariwo supports through the association Gariwo Sarajevo.


The Balkans region is still crossed by the mentality that led to the war in the former Yugoslavia. Such is the climate in Serbia, where President Nikolic often gives himself over to denialist statements. It is a sort of a "cold aftermath of war", which is perceived also in Srebrenica, as seen at the recent city elections.


Now this coldness is detected also in Kosovo of recent independence. Agron Bajrami, chief-editor of the Kosovar paper Koha Ditora, reported more censorship of journalists now than prior to independence. In his opinion all over South-Eastern Europe, from Albania to Serbia, the state media inherited from communism were split up among the political parties which crack down against and limit freedom of expression.


Furthermore there is rampant violence against non-Albanian minorities, expecially the repatriated Serbs. The controversies on the recognition of Kosovo existing within the international community donot favour reconciliation and according to UN Secretary General Ban Ki Moon Kosovar situation is still "critical".