Mladic is jailed in The Hague 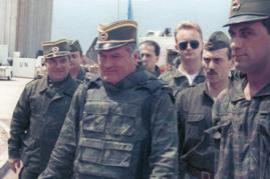 Ratko Mladic is detained in Sheveningenm prison, also hosting Radovan Karadzic. In the first court hearing his lawyer said he "defended his people" during the war in Bosnia.

Mladic was extradited and jailed in Sheveningenm prison in The Hague. The first hearing would have been set for Friday June, 3 2011. According to the ruling the defendant must "present himself in time" before the court and was submitted to a medical examination. Italian magazine Il Post explains that "the same prison hosts Radovan Karadzic, who is believed to be the mastermind of the siege of Sarajevo and the ethnic cleansing of the non-Serb population. He appointed Mladic to the post of commander of the Second military district of the Jugoslavian army and in 1992 he proclaimed the creation of the Serbian Republic of Bosnia-Herzegovina,of which he became the President. He was arrested in 2008 after being in hiding for 13 years and he is on trial in The Hague for genocide and crimes against the human kind".

30 May
Demonstrations against Mladic arrest
his son: "He rescued many women"
Protests against the arrest of Srebrenica executioner. His son defends his presumed innocence by claiming "he has nothing to do" with the massacre.

27 May
Seizure of Ratko Mladic, Srebrenica executioner
testimony by Svetlana Broz
Gariwo Sarajevo's leader and author of Good people in an evil time Svetlana Broz commented for Gariwo upon the arrest of General Ratko Mladic, who committed the most atrocious massacre ever carried out in Europe after World War II.

"Seizure of Ratko Mladic in Serbia, Europe's most wanted war criminal is no doubt still very important event in spite of the fact that it was pure political trade by Serbian politicians with EU.

Bosnian victims were waiting the justice last sixteen years. Today they have at least partial satisfaction. Victims have a full right to be afraid of common phenomenon that Mladic might stay with impunity because of dawdle of the ICTY.

Mladic’s trial at ICTY should become the trigger for the reconciliation in the region if this trial finally face millions inhabitants of Serbia with the fact how many atrocities have been committed in the name of their own ethnic group.
New generations of students at Balkans should be thought about recent war in Bosnia and Herzegovina from the ICTY documents rather than trough distorted text books of history written by historians docile to the politicians who were often war criminals or are war profiteers.

After getting rid of war criminals at large on Balkans, European Union’s institutions will have a new the most important task in West Balkan: to help and support those stalwart individuals who are ready to fight organize crime in their countries. If EU does not recognize that as the ultimate goal after a while the present local West Balkan problem will became serious cancer in European body".

Sarajevo,
May 26, 2011 Svetlana Broz
The author of the book Good People in an Evil Time
Director of NGO Gariwo