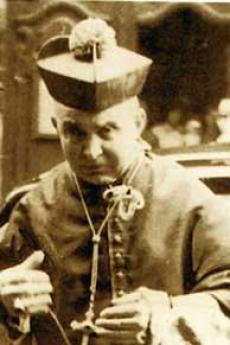 Dalbert Hallenstein is an Australian reporter who has worked for the Melbourne Age, London-based Sunday Times, The European and The International Herald Tribune. Recently he has engaged in a series of books about the Righteous among the nations, starting from Giorgio Perlasca. Here we publish an excerpt of his next book, about Angelo Rotta, the Vatican nuncio to Budapest during WW2 who went out of his way to rescue the Jews.

Angelo Rotta, the Vatican nuncio to Budapest during World War Two, was one of the most outspoken of the Holocaust heroes. He didn’t hesitate to openly condemn Hungary’s Nazi leaders to their faces and also to censure the Pope himself for his refusal to speak out publicly against Hitler’s atrocities.

In late November 1944, with the Russian army approaching the outer suburbs of Budapest, he sent a dispatch to the Vatican stating: “I believe that it would be useful for His Holiness to intervene openly and with force in order to impress the government and public opinion that the Vatican does not approve of either the principles or the methods of the present Hungarian regime”. He was referring to Hungary’s Nazi Arrow Cross junta led by its violently anti-Semitic leader Ferenc Szàlasi.

Angelo Rotta was unique amongst the Vatican’s wartime diplomats to have the courage and audacity to fire off such critical advice to the notoriously autocratic Pius XII. And this was only one of a series of such highly critical suggestions he made in his dispatches from Budapest. Such was his courage and independence that he even sanctioned the distribution of false baptismal certificates in order to save Jewish lives, risking excommunication for condoning such a heretical act.

Without his courage and tireless support, such people as Raoul Wallenberg, Carl Lutz and Giorgio Perlasca would not have been able to save as many of the persecuted as they did and may not even have survived. As Dean of the diplomats still remaining in Budapest in 1944/45, he wrote and coordinated their protests against the Hungarian regime’s anti-Semitic atrocities. He also never hesitated to exploit the Vatican’s prestige to convince the regime's mainly Catholic leaders to officially recognize the tens of thousands of letters of protection and improvised passports which he and the other diplomats of the neutral powers, such as Sweden, Switzerland, Spain, Portugal and the Vatican itself, were issuing to the persecuted Jews.

His support was also crucial to maintaining the regime’s continued recognition of the dozens of extraterritorial buildings in which the neutral diplomats accommodated the thousands of Jews they were attempting to save. The legality of both the letters of protection issued by the embassies and of the extraterritoriality of the buildings in which they protected their Jews was highly dubious in international law. Without the assiduous support of Angelo Rotta, Hungary’s Nazi leaders would almost certainly have withdrawn their recognition of the validity of the letters of protection and of the extraterritoriality of the safe houses with disastrous results.

During research for a book on Angelo Rotta, I discovered that his rescue activities began immediately after Nazi Germany invaded Poland in September 1939. Refugees, mainly escaping Polish soldiers and Jewish civilians, immediately began flooding into Hungary where they were arrested and imprisoned in concentration camps awaiting deportation back to Nazi-occupied Poland. Through the Vatican’s diplomatic network, Rotta was informed almost immediately of the appalling Nazi atrocities perpetrated against the Polish population. The Poles were soon condemning the Pope’s refusal to speak out openly against the massacres which many described as ‘a crime of silence’.

Angelo Rotta immediately began a largely successful diplomatic campaign to prevent the deportation by the Hungarians of the refugees back to Poland where they would face almost certain death. He began to make regular visits to the camps where they were being held to show publicly his support. As the war progressed, more and more refugees flooded into Hungary, not only Poles and Jews, but also Ukrainians, Serbs, Russians and British, French and Italian prisoners of war.

In 1942 he heard that a group of Jewish children were about to be deported to Poland. He rushed to the camp where the children were being held and immediately founded an orphanage for the ‘Children of Catholic Polish Officers’ in order to protect and hide them. Because they were officially ‘Catholic’, nobody could touch them, even though they were in fact Jewish. He also managed to convince the local Hungarian civil authorities to give them new, non-Jewish names.

After the German invasion of Hungary in March 1944, he began an almost daily campaign protesting personally to Hungary’s Fascist leaders against the deportation to the death camps of hundreds of thousands of the country’s Jews. It was in this period that he and the other diplomats began to distribute their letters of protection and to set up extraterritorial accommodation for the persecuted Jews. Gradually the Vatican embassy became packed with escaping Jews who were living everywhere - on the staircases, in the offices, in the corridors, - in every available space.

Meanwhile, Angelo Rotta was frantically busy organizing a clandestine network of priests and nuns who were willing to risk their lives hiding Jews, particularly Jewish children. The network also included protestant pastors, communists and the Zionist underground who hid the persecuted in dozens of convents, monasteries, private homes, cellars and abandoned factories. A significant number of Jews of ‘Aryan’ appearance also managed to survive in the open due to being given false birth certificates testifying to the Aryan purity of all four great grandparents.

By late December 1944, the Russians had completely surrounded Budapest and were gradually fighting their way into the center of the city. At the same time, hordes of Hungarian Nazis went on the rampage, slaughtering the remaining Jews. In January the Vatican Embassy received a direct hit during a Russian air raid and was almost completely demolished. Angelo Rotta and the embassy staff were sheltering in the catacombs below and survived. Here they would stay for another 7 weeks until the Russians finally conquered the city in February 1945.

He returned to Italy in 1945 and lived as a pensioner in the Vatican where he was virtually shunned by the Pope and most of his former diplomatic colleagues. After the death in 1958 of Pius XII and the election of Rotta's old friend and colleague, Angelo Roncalli, as Pope John XXIII, his life began to change for the better. Pope John immediately offered to appoint him as a cardinal, but he refused, stating. with typical modesty, that he was too old. He died in 1966 having told none of his friends about his activities in Budapest.

It was only after he was finally honored as one of Righteous Amongst the Nations in 1997, 31 years after his death, that his closest friends found out about his achievements in Budapest. ”We all knew that he had had a very distinguished career, but it never occurred to us that he was a hero”, said one of them.