"We are all sons of the same father"

Pope Roncalli and his relations with the Jews 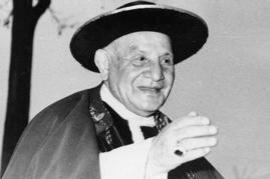 His agreement with the instructions of the Vatican and his “original solutions” to rescue the Jews in the Holocaust, his esteem of Pope Pious XII and the absolute novelty of a Papacy that revolutionized the Church and the relationships between the Jews and the Christians: they are some of the elements emerging from our conversation with father Ezio Bolis, director of the Fondazione Giovanni XXIII, who has recollected his long talks with Monsignor Loris Capovilla, personal secretary of Pope Roncalli for many years, in a recent book. Here is what he told Gariwo:

Which role did Pope John XXIII play in the Holocaust? What kind of rescue deeds did he perform to help the Jews during his stay in Turkey as an Apostolic Delegate?

The commitment of Apostolic Delegate Monsignor A.G. Roncalli to help the Jews fleeing Nazi terror is a major chapter in the history of his decennial stay in Istanbul, from the beginning of 1935 to the end of 1944, years in which the tragedy of the Holocaust surged more and more dramatically. The Holy See’s official files available until now and, above all, Roncalli’s diaries at our disposal clearly show that the future Pontiff had many important meetings with the Jewish organizations and the groups of refugees, above all Slovakian refugees determined to reach Palestine, crossing the neutral corridor of Turkey to flee the Nazis. In his notebooks, Monsignor Roncalli wrote about his contacts with representatives of the Jewish organizations, such as Chaim Barlas, chief of the group of the Zionist Palestinian emissaries in Istanbul, the great rabbi of the Holy Land Isaac Herzog, great rabbi Markus of the Askenazi community of Istanbul. And he mentioned also the written demands of 1943 to king Boris III, whom Roncalli asked to help and assist the Bulgarian Jews and refugees, up to the point to reach the King to disobey Hitler’s order – he would have preferred to see him rebuke them.
I will cite just one of the many episodes of the help that MR gave the Jews, one that is already well known. A ship full of Jewish children who had managed to escape the Nazi regime had set sail from Constantsa, crossed the Black Sea and made its way through the Bosphorus to Istanbul docks. The Turkish government, to defend the country’s neutrality and out of fear of a furious German reaction, first tried to send the ship back to Rumania. Through the intercession of Monsignor Roncalli, that was met with a sincere will of collaboration by Rumanian ambassador Alexander Cretzianu, the boat obtained the tacit consent of the Ankara government to cross the Dardanelles and head for the docks of a neutral country. Thus the Jewish children were taken into safety.
The library of the Istanbul Nunciature still owns a precious book: Gioseffo Flavio Historico Delle Antichità et Guerre Giudaiche (Joseph Flavius Historian of the Antiquities and the Judaic Wars), with a personal note by Monsignor Roncalli: «Gift to the Apostolic Delegate in Istanbul, Monsignor Roncalli, offered by Dr. Wettman and Mrs. Bauer in the name of the Jews of Palestine and elsewhere, on 25 July 1943, as a token of our gratitude for the numerous efforts made on behaf of the Jews in the sad years 1942-1943».

How did the Holy See view the interventions by Delegate Roncalli to help the persecuted Jews who were transiting from Turkey on their way to Palestine and his steady relationships with the rabbis and the Jewish Agency?

Ever since the time of Pope Pious XI, the Holy See had condemned every kind of anti-Semitism. On the other hand the Holy See had some reservations about the idea to send all Jews to Palestine, as it feared a kind of reconstruction of the ancient Jewish kingdom. Theoretically, Roncalli seemed to agree with these reservations, as he believed that Palestine had been for many centuries also a homestead to Christians and people of other faiths. Rome was worried that the Holy Places, if run by a Jewish State, could lose their freedom. This does in no way diminish the hectic humanitarian efforts to help the Jews that was promoted and supported by the Holy See, and overtly recognized by prominent members of the Jewish community, like the Chief Rabbi of Palestine, Isaac Herzog. After having a conversation with him on 23 February 1944, Roncalli made the following note in his diary: «He was very eager to officially thank the Holy Father and his staff for helping so many Jews, and asked me to intervene for many Jews who were in peril on this side of the Dnieper where the Germans are withdrawing: and he was anxious to send his special thanks to Monsignor Cassulo, Nuncio in Bucarest. A lovable person, this very approachable great rabbi». Roncalli thus acted in complete unity of purpose with the Vatican instructions, as he always cared about showing how his interventions were expressions of the Church’s love. Nonetheless it must be said that the future Pontiff, though acting in full agreement with the Holy See’s instructions, could also exert that cautious discernment that, taking the concrete circumstances into account, led him to adopt original solutions to help the Jews.

The International Raoul Wallenberg Foundation submitted Yad Vashem a detailed file - with pieces of testimony and bibliographic, historical and documental material – to ask for the recognition of John XXII as a “Righteous among the nations”. What do you think of this?

From the very thorough historical reconstruction made by the International Raoul Wallenberg Foundation, and more material gathered from interviews and survivors’ pieces of testimony, it emerges that Roncalli was coherently committed to helping the persecuted Jews. Many of these sources refer about “immigration certificates” obtained through diplomatic channels and the continuous cooperation with various rabbis and the Jewish Agency. Documentation includes evidence of his repeated interventions to help Jewish refugees from Italy, Rumania, Germany, Croatia, Slovakia and Greece, as well as from France, to ensure they could go through riskless corridors to reach Palestine or other safe places. Twelve years ago already, by writing to Dr. Baruch Tenembaum, Monsignor Capovilla reminded us that there is a significant documental evidence of “the humanitarian deeds of Archbishop Angelo Giuseppe Roncalli (widely welcome by his colleagues of the Vatican Diplomacy). Moreover he signed numerous affidavits stating that certain people, the Jews in this case, were well known to the Pontifical Nunciature, which somehow agreed to vouch for them”.

According to Wallenberg Foundation the response of the Jerusalem Memorial to the nomination of Pope Roncalli as a Righteous among the nations is coming later also because of the relationship between Roncalli and Pius XII.

It is well-known that the relationship between Pope Pius XII and Monsignor Roncalli was based on reciprocal esteem. In December 1944, it would be Pope Pacelli in person to support the “promotion” of Roncalli to the Nunciature of Paris, in a very difficult diplomatic situation. On the other hand, it is also very well-known that these two great figures were different in style, and their diversity would become apparent above all in the innovative features of John’s papacy in comparison to his precedessor’s. We should also remember that the issue is made more complicated by the different and often opposing historiography relating to the behaviour of Pius XII face the enormous tragedy of the Holocaust that hit the Jews. Until we can access the whole archival documentation of those times, there will be room for many interpretations. At any rate, Roncalli did not deem that the esteem he nurtured for his predecessors meant that he had to imitate them.

Which role did Angelo Roncalli play in the establishment of the State of Israel?

I don’t know the documents well enough to be able to state something about it. Monsignor Capovilla, in a note of October 2000 concerning this issue, correctly pointed out that we should distinguish Judaism from Zionism, adding that also among the Jews not all of them agreed with the return to the Fatherland. At any rate, the State of Israel is secular and it doesn’t consider itself the continuation of the Messianic Kingdom. Personally, I recall some details which I think are of the utmost importance. When he was elected to the Papacy, John XXIII got his staff to inform the government of the State of Israel, although the Holy See did not recognize it and had no diplomatic relations with it. Great Rabbi Isaac Herzog telegraphed “sincere blessings” to the Pope. Another significant episode was the Pope’s initiative to abolish such sentences or references which could sound offensive to the Jews in the liturgical books. And again, on 17 March 1962, while he was travelling by car along the river Tevere, he found himself in front of the Synagogue of Rome. He had the car stopped and its roof opened up and he blessed a group of Jews who were going out of the temple. Rabbi Toaff, who was an eyewitness to this, recalled that “after a moment of understandable confusion, the Jews surrounded him and applauded him enthusiastically. In fact it was the first time in history that a Pope blessed the Jews, and that could be the first true gesture of reconciliation ».


What is in your opinion the legacy of Pope Roncalli, in particular as far as the relations between Catholics and Jews were concerned, also in the light of your long talks with Monsignor Loris Capovilla?

I like recalling what Pope John XXIII said on 17 October 1960, when he welcomed to a hearing a group of 130 people of the United Jewish Appeal: Jewish Study Mission coming from Rabbi Herbert Friedam, who at the same time as greeting the Pope wanted to recall the prudent interventions of the then Apostolic Delegate to Turkey and Greece, which were highly beneficial to the Jewish persecuted and refugees.
The Pope replied by recalling the story of patriarch Joseph: «I am your brother. Of course – he went on – the difference between those who admit only the Old Testament and those who add the New Testament as a supreme law and guide is huge. But this distinction does not suppress the brotherhood deriving from our same origins. We are all sons of the same Father. We come from our Father, and we will go back to our Father ». In my opinion the initiatives of Pope John XXIII to restore brotherly relations between Christians and Jews paved the way to that turn that would be solemnly confirmed by the declarations of Vatican Council II, above all in the document Nostra Aetate, and by the deeds of the following Pontiffs.