​Father Puglisi’s tree in the Temple Valley of Agrigento 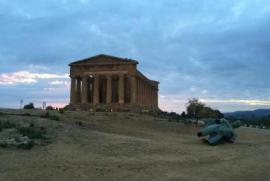 The valley of Temples in Agrigento (Gariwo)

There is no single archeological site in the world where you can feel the charm of Greek civilization with the same intensity as in the Valley of Temples in Agrigento. When you climb from the temple of Heracles up to the temple of Concordia, suddenly it seems almost by magic as if time had stopped in front of such a great beauty, and you feel a sense of gratitude for the preservation of those monuments.

From now on, those who cross the valley will feel an unexpected sense of surprise when seeing something new on the path leading to the temple of Juno.

He will in fact read, besides a young pine that has just been planted, an inscription dedicated to the memory of Father Puglisi, the priest killed by the Mafia for the groundbreaking force of his words:
“Remember to be the defender of the least of men.”

Maybe he will realise that Goodness and Beauty, as the great Greek philosophers used to think, always have something in common; that the people’s memory of Good is as important as the preservation of monuments; and maybe he will understand the value of gratitude towards those who have passed on to us a heritage of masterpieces.

Father Puglisi, in fact, taught young people about a key idea. The Mafia Godfathers tried to entice them by promising them protection, jobs, respectability. But all this has a high price. Those who tie themselves to the Mafia lose the most precious good in life, i.e. their own humanity. What is then the purpose of an ephemeral wealth if you lose the taste of love, friendship and the respect of the other human beings and you become prone to commit the worst crimes?

The Mafia was scared of his testimony. They understood that moral education was an obstacle to their recruiting activities. The Graviano brothers were worried about the signals they received, as Father Puglisi’s friend, Father Cosimo Scordato, remembered: “Are you not ashamed that such an insignificant priest can blow away your power from this neighbourhood?” Yes, they really meant “the power”, but his own was of a very different kind from that of the Mafia: he had power over consciences. That power nonetheless is exerted not by a “patron” or a “godfather” that manipulates men through blackmail and deception, but it is a power that everyman can master to be free.

For the mafiosos though, such an education of conscience represented the risk of losing their grip on the territory. Hence they murdered him to prevent his message from opening breaches in the heart of young people. They conjured up that by murdering they would free themselves from a dangerous rival, as if it were matter of eliminating the mafioso chief of a competing gang.

This was their big mistake. That seed of love is still alive. It was not enough for the mafiosos to shut his mouth forever, because his words have left important traces that even the most sophisticated villain will not be able to erase. Mafiosos did not understand that the individual conscience does not depend on any patron, including God, but only on the people’s taste for freedom.

A thousand youths have remembered him by gathering in the Temple Valley to inaugurate the tree dedicated to him.

Thus amidst the ancient columns of Greek civilization a new Garden of the Righteous Worldwide was created.

A brave Sicilian woman, Assunta Gallo, the relentless activator of the Academy of Mediterranean Studies, is the cherished personality behind it.