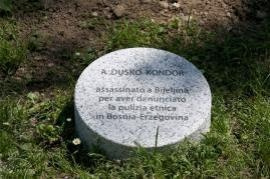 In a ceremony in Sarajevo in the presence of diplomats, politicians, NGO members and high school students honours were bestowed on the figures of civil courage in the former Yugoslavia most important in 2011. The Prize commemorated the Gariwo coworker who was murdered in 2007 to prevent him from testifying in court about a massacre of Muslims perpetrated during the war. Among the 43 nominations received, the Commission led by Svetlana Broz chose the figures of Josip Reilh Kir (posthumously); Zlatko Hrvic (posthumously), Sekul Stanic (posthumously); and Zoran Mandlbaum. Awarded was also Esad Kocan, Montenegro journalist who sacrificed his career and family tranquillity to oppose ethnical cleansing.

as Chief of the Osijek Police Station in Croatia he took overtly side against the war and protected all yugoslavian citizens regardless of their ethnicity. He refused to let the work of his police station be influenced by politics and ideology and fought the media's political exploitation committing himself to obtain corrections wherever the truth was distorted. Before the Communal assembly of Osijek, fully aware that this might cost his life, he stated in June 1991: “Until I am the chief of this police station there won't be any war between Serbians and Croatians”.

Zlatko Hrvic
Bosnian health official in charge of the first Mental care hospital of Mostar dead in 2006. In April 1992 he risked his life to care about the non self-sufficient mentally disabled who had remained without food and medicines because of war.

He rescued the most serious mentally ill of his institute, first by remaining in the facility to take care about them and feed them and then by assigning them to other hospitals while the JNA and the paramilitaries cut the communications and left the institute isolated.

Sekul Stanic
Pediatricist and director of the hospital of Foca, Bosnian citizen, he was murdered on 17 December 1992 in Miljevina. Since April of that year he had set his life to risk to help his colleagues who were persecuted due to their ethnical origin.

he rescued dozens patients, including women who had gotten pregnant after ethnical rapes, by favouring their runaway to safe areas, and paid his coherence with the principles of humanity with his life.)

Zoran Mandlbaum
President of Mostar's Jewish Community for the duration of war, he is now an offiicer of the Federal Ministry of Enterpreneurship and Crafts. He lives in Mostar.

from 1992 to 1995 he steadily risked his life to help, sometimes also obtaining their release, some citizens imprisoned in the camps of Heliodrom and Dretelj. As a person in charge of the Jewish Community he signed over 200 documents in favour of people who could thus flee to Croatia or Israel, finding shelter from torture and ethnical persecutions. He helped the partners of mixed relationships to get and remain married. In times of food and medicine shortage he brought convoys of humanitarian aid to the Eastern part of Mostar, undergoing also an explosive assault in the area where he lives.

Founder of the Monitor magazine and Political editor of Montenegro tv, he paid his civil disobedience with the epuration from this latter charge in 1998. Being aware of the disruptive force of Belgrade's and Podgorica's policies, he founded the Monitor weekly to provide an impartial and independentent information in favour of the citizens of Montenegro. Without fearing the consequences, he wrote numerous articles where he investigated negative phenomena of the Montenegro and Serbian society. During the wars in Croatia, Bosnia and Kossovo he took fierce pacifist stances at a time when the killers didn't hesitate to compile lists of journalists and even readers of his newspaper. In 1992 he had to sacrifice his family tranquillity to send his wife and his six-month old daughter abroad for six months in order to protect them from persecutions and keep able to fight for his peace ideals.

The tree of Dusko Kondor on WeFor