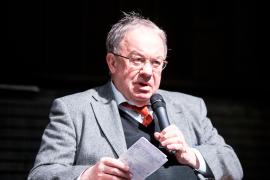 Olivier Roy at the conference

The terrorist phenomenon is certainly not recent: it has been since the end of the Nineteenth century, in facts, that it became a modality of political action. Europe has always experienced several kinds of terrorism – it suffices to think of the years of the lead bullets in Italy. What is – or seems – new in nowadays' Islamic terror it is its suicidal dimension. Seeing young people who let themselves be killed in a terrorist operation, when their death is not indispensable for its success, is extremely scaring for us. It is this fascination for death that characterizes the young applicants to become terrorists. Suicide terrorism was not invented by the Muslims, but by the Tamil Tigers of Sri Lanka, and this suicidal dimension of terrorism, ever since the mid of the Nineties, has become the operational way of the radical Islamist attacks. Since 1995, with the attacks committed by Khaled Kelkal in France, a recurrent scenario has come about: some young people blow themselves up with explosives to commit an attack, or let themselves be killed by the police, whether putting resistance or not. This means there is no “plan B”, there exists no alternative while committing the attacks: death is a part of the aim of the terror attacks. I believe it is this nihilist feature, this quest for death, that adds up to the terror effect. If we were confronted with “normal” attacks – such as in the Seventies and Eighties in Europe, there would not be such tension and this deadly feature which is key to the Islamic attacks of the past 20 years.

Apparently, what to do now is to understand the reason and origin of this terrorist and deadly dimension. The first possible answer, the most general one, is that we need to search Islam for the religious genealogy of Islamic terrorism. Thus we try to retrace a genealogy starting from the Koran, trying to understand what in the Koran might lead to terrorist violence, to then ask ourselves some questions about the concept of“Jihad”. For example, we look for all the thinkers who in the course of Muslim history have had a radical vision, or we analyze the phenomenon of Islamic fundamentalism in the past 30-40 years, to try and understand how this radicalization of Islam might explain Islamic terrorism. And in this perspective, the idea is in the first place to understand what the theological elements leading to terrorism are, secondly to promote a de-radicalization of Islam, determining – as someone says – a “theological reform” (“moderate Islam”, “European Islam”). But in all these cases we focus on the Muslim religion to understand the origins and at the same times the means of a struggle against radicalism.

The problem though is about understanding whether this works, if this is simply the question, and to understand I think we should avoid ideological debates, ask ourselves what Islam is, and getting back to something much more essential, i.e. political sociology. If we examine the list of the young people who have tried to or actually committed terror attacks in Europe over the past 20 years – like in my analysis – and if we consider all these (attempted) attacks, we obtain a very significant data base, from which we can infer a lot of information useful to understand the origins of terrorist radicalism.
I analyzed the area of France and Belgium from 1905 to 1996 and identified 140 terrorists and other people, who to follow them have headed to Syria and joined Daesh. A few things are quite remarkable. Over the 20 years that I have analyzed, the profile of these people has never changed: they are the same categories that “launch” themselves into terrorism. They are thus all young – a generational feature, which is quite self-evident, they die, and if they survive they commit no more terror acts. 65% of these young people are second-generation Muslim migrants. At the end of the 20 years time lag I have analyzed, we would expect a third generation, but we have none. There is almost no third-generation terrorist.

This happens because the cleavage between religion and culture is at its peak with the second generation. Parents have not passed on religion to children, also due to language issues – the second generation speaks French, while their parents speak the languages from Maghreb. Secondly, first generation religion is very much rooted in local tradition – we talk about Islam of Morocco or Tunisia – and parents find it difficult to pass it on to their children, who have integrated within the French educational fabric and do not, or do not well, speak Arab. The third generation instead has French-speaking parents who have more or less succeeded in living a life as Muslims in France. The third generation has thus a role-model rooted in French Islam. I am not going to say it is less interested in religion, but it lives in a quieter, more integrated context.

Another important category, representing 25-30% of those who approach terrorism, ar the converts. It is a very weird phenomenon, because some middle-class young people, belonging to Catholic or communist families, convert to Islam and directly turn to violence. No Muslim or Islamic terrorist has such a high percentage of converts, only terror organizations do.

Another constant is that 90% of terrorists have no religious background and have not led any religious life before turning to political action, they have attended no religious school nor frequently attend the mosque. Very few of them speak Arabic and nearly all of them lead normal lives as modern European young people: they can consume hashish, be rap lovers, have girlfriends and drink alcohol. An example is provided by the Abdelslam brothers, who came from the neighborhood of Molenbeek, in Belgium: they were thought to be salafists, while they sold hashish under the counter in the pub they worked at, they served alcohol.
As a conclusion, 50% of the terrorists of the French-Belgian area have a criminal record and most of them have radicalized while in prison. Prisons and clubs played much more important a rol in their radicalization than mosques.
When we look at what they post on the social network, the Internet, their private conversation, we realize how the majority of them are really charmed by death. This means they are not militants, they are not people who head for Syria to create a better, more just, or more religious society. These people do not belong to any religious organization, or volunteering group. They are lonely wolfs who live and radicalize by small groups belonging to the same neighborhood or having met in prison.

Hence, what is wrong? What happened? When we justly look at the fact that the vast majority of terrorists is made of second-generation immigrants and converts, we ask ourselves what is the common feature between these two categories. Their common denominator is that in both cases religion is of a kind that was not passed on, it does not stem from a cultural tradition. In both cases there is a phenomenon of religious de-culturalization.
The problem is not the importation of a violent Muslim culture, but rather the loss of the culture of origin. Thus, in my opinion, a key element against radicalization is the re-culturalization of religion, the new adjustments to integration of religion into a cultural context which is certainly the European one – and not the multi-cultural context.

These young people are not integrated, but their rapprochement with fundamentalism is not caused by an economic factor, because many ot them have a job and a diploma or belong to the middle-class. The problem that justly goes closely tied with the re-culturalization of religion is re-socialization of religion. This is why there are many radicals in Western Europe: because second-generation Muslims must recreate what was the social religious link. And this is why I think we should not close mosques, but rather open them to society and bring forward the phenomenon of re-socialization, to overcome a problems which in Islam is embittered but is there in all religions: the cleavage between the community of the faithfuls and a society, which is profoundly secularized.

A lot of confusion is made between terrorists and fundamentalists; the majority of terrorists, we need to say, is not fundamentalist. Suicide bombers do not come from this kind of schools, the salafist teachings in this case. If we talk about Afghanistan, Pakistan, there we really have some Salafist schools, which produce young radicals.
Conditions are very different in the two cases.

We talk about moderate Islam versus fundamentalist Islam, but what is a moderate religion? In Europe we think a moderate believer is fairly a believer; many Catholics in France, for instance, do not talk about their faith when they are at work, because in the best case it is ridiculous and in the worst one they are considered as fanatics.
We then have to understand what religion does. If we talk about a reform of Islam, it suffices to read Luther to understand what can be considered as moderation and what is at a different stage.