The Crisis of Europe and the Righteous of Our Time

a series of conferences at Teatro Franco Parenti of Milan 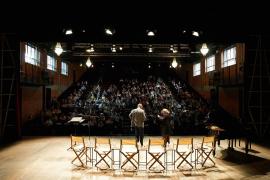 In the face of the istitutional, moral and cultural crisis that is spreading all over Europe, Theatre Franco Parenti opens its doors to the project by Gariwo, the forest of the Righteous, for the creation of a public discussion on the theme of personal responsibility facing the challenges of the new millennium. The theatre's great hall will host 4 meetings on the moral issues of our times, through which a reflection will be developed on the Righteous figures who take up personal responsibility for the problems of society, indicating through their deeds the pathway that needs be undertaken.

Within each meeting, we will propose an expert analysis on the theme at the core of the conference itself, sided with the concrete experience of one or more witnesses who will present their own views

The meetings will conclude with a debate, in which the audience can take actively part, and that will continue on the pages of Gariwo Website as well as the social networks.

Our idea is to open a discussion on the key topics involving our society, which shall not end up with a definitive synthesis and an absolute truth, but shall be extended to the audience thanks to the support of the new technologies.

We are not aiming at drawing up a political platform, but at indicating a cultural horizon able to stimulate a common commitment within a plurality of cultures.

Tuesday 17 January, at 6 pm
Genocide prevention. The extermination of thousands people in Syria, the genocide against the Yezidis in Iraq or the persecutions against the Rohingyas show us a new failure of the United Nations and the international community, which are failing to prevent mass atrocities and keeping the commitment to "never again" that had been made after the Holocaust.
Speakers: Marcello Flores
Witnesses: Yair Auron, Gérard Malkassian

Tuesday 14 February, 6 pm
The cultural battle against Islamic fundamentalist terror. Terrorism needs be dealt with as an ideological paradigm that enchants youths and seduces with its promises. It is thus important to bring about the good deeds of the Muslim Arabs, the examples of dialogue and civil coexistence that show us alternatives to the fundamentalist phenomenon.
Speakers: Olivier Roy, Alberto Negri
Witnesses: Hamadi ben Abdesslem, Hafez Haidard

Thursday 30 March, 6 pm
The crisis of Europe. The European unity is going through one of its gloomiest times, with the landing of thousands migrants and the rebirth of national popular movements that put its very integrity to risk. To face this trend it would not only need a federal project carried out by Brussels, but also a cultural battle able to rebuild the sense of belonging to Europe for our identity.
Speakers: Massimo Cacciari, Ferruccio De Bortoli, Konstanty Gebert

Thursday 18 May, 6 pm
The Righteous of our times. The crisis we are living in calls us again to the need of bringing about these exemplary figures, the Righteous, who in facts fill the institutional void and act in the face of indifference, indicating with their actions the pathway that needs be undertaken.
Speakers: Gabriele Nissim, Salvatore Natoli, Gabriella Caramore, Milena Santerini