For A Charter Of Values

Gariwo's event at the Teatro Franco Parenti of Milan 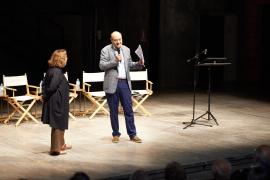 Gariwo is planning a series of meetings at Teatro Franco Parenti for the year 2017, that aim at setting out the premises of a Charter of Values about some moral issues of our times. In fact. Gariwo, in cooperation with Teatro Franco Parenti, wishes to propose a debate on some ethical and cultural issues that have characterized its activity on the subject of the Righteous and personal responsibility in the face of the challenges of the new millennium. This is not about predisposing a political platform, but rather it aims at indicating a cultural horizon able to stimulate a common engagement within a plurality of cultures.

In European history, in the face of serious emergenciies, under much more difficult circumstances - when war and nationalism had left behind only rubble, or the Berlin wall divided our continent - there have been experiences worthy of being remembered, which can become a reference point.

Let's think for instance of the Manifesto of Ventotene by Altiero Spinelli, who launched the idea of European unity, or the message of Charter 77 in Prague, which set the premises of resistance to the totalitarian system. Under both circumstances, the best forces were asked first of all to gather around an ethical commitment that would also keep the richness of plurality and diversity. Both Václav Havel in Praga and Altiero Spinelli in Ventotene, in the face of the splits caused by Nazism and Communism, sensed the importance of overcoming the idea of the enemy that had caused so many deaths in human history and build, on the contrary, an horizon of sharing.

A new beginning was possible, not starting from a policy of clash against a new foe to demonize, but from the idea of building together a common pathway, by honestly admitting one's difficulties and fragilities.  True power, noticed Hannah Arendt, arises in history when people decide to do things together and not when they fight each other, under the iillusion to be able to do it without the others and being the sole keepers of what is right and true.

Secondly, it was all about acknowledging that plurality and the horizon of democracy are the best ways to face the challenges of the new times.

This is why, in Prague, those who signed the Charter did not do so in the name of a particular political idea or a religious creed set against another, but in the name of a commitment for the improvement of the humanity For the signatories, the thing which mattered most was the ethical commitment an the value of moral intention, together with the awareness that every project coud be carried out only by admitting that none of the them was the keeper of a definitive truth, and this is why every one had to laid him or herself always on the line.

This is why the movement gathered completely different people and intellectuals, liberals, socialista, Jewish communists, Catholics, and Protestants. Different, and yet united by the common fate of their dignity, humanity, and partiality. None of the partiicipants was interested in imposing his own views to the others in an authoritarian way, because they were all convinced that the verification of one's opinion could only be the outcome of an uninterrupted dialogue and a continuous exchange within a common experience. It was good deeds that witnessed the validity or not of one's thought.

The methodology chosen for Gariwo's encounters in Milan will consist in featuring in every conference an analytic reflection together with a concrete experience of one or more witnesses.

This methodology is focused on three main goals: opening the discussion on the key themes of our times within a cultural and political panorama, which too often fails to put at the center the great priorities of our life.
Secondly, avoiding setting out an allegedly "definitive" synthesis to this discussion, but rather urging people to continuing the discussion in an endless pathway, because, as Kafka points out, there exists only a living truth that is continuously updated.This is why the participants will be able to find new places to meet, on the Web as well as at the theatre, to enrich with their own experience the themes object of our reflection.
Thirdly, not only presenting influential opinions on key issues, but also showing concrete experiences of people who have tried to put themselves at play around the great challenges of our times.

The conferences that will take place at Teatro Franco Parenti face the themes that will be worked out in the Charter of Values. There are in facts some knots in the crisis of out times, which demand a priority ethical commitment.

First of all the extermination of thousands people in Syria, along with the genocide against the Yezidis in Iraq, recall us to reflect on a new failure of the United Nations and  the international community, that once again have not been able to prevent mass atrocities. Despite the existence of a UN convention on genocide preventioon, the various instruments that have been set out over the recent years (International Courts, protection of the hit populations, blue helmets) have proven inadequate for the crossed vetoes of the super powers and a serious absence of Europe.

The international responsibility for the mass crimes should be the first imperative of a Charter of Values.

Thou shall not kill is the first commandment that ought to rule the activities of the states, but every time the various national interests prevent the application of such principle. This way. despite the moral commitment rhethorically repeated on every Holocaust Remembrance Day, that "never again" that the world has pronounced after the Holocaust appears as an empty phrase.
So, for many people massacred in several different crises, the same indifference that hit the Jews during the Holcoaust seems to repeat itself.What hits us in this very broad gray area - as Primo Levi would say - is that today mass communication enables us to learn about evil almost live, but then we are suddenly hit by a sense of repression that is caused by the most trivial justification: we cannot do anything about it, so why should we think of it?

The second point in the crisis of out time is the serious risk of a serious tearing of Europe. Today, that unity that Spinelli had so longed for seems to have been put in the line for the serious selfishness of the European countries, that appear to reject welcoming migrants. Fences are erected because the members of the community refuse to build a common policy able to manage the historic phenomenon of immigration and face the international crisis in all the Middle East. The center of the stage is again occupied by the kind of populism that indicates European integration as the cause of all evils. Being against Europe has become such a magic wand to solve demagogically all kinds of problems, and in many countries the next elections will revolve on this theme

In order to invert this trend, it is necessary not only that a new political dynamics is set out to relaunch a federal project involving all institutions in Brussels, but als a great cultrual battle able to pur forward again the sense of belonging to Europe. Feeling European is not a limit to one's sovereignty, but rather and enrichment of one's own identity. For example, let's think of the great impact on sport that could have the participation of a common European team in the Olympic Games, where the national delegations parade under one only flag, as imagined by the Italian swordswoman Elisa di Francisca, who celebrated her medal under the EU flag.

The third point we need to face is  the morl response to Islamist terrorism Despite the serious attacks that have hit Europe and the Arab countries, only few people have understood that in orde to defeat the Isis and the terror groups the military or security plans are not enough, but it is necessary to carry out a great ideal battle that takes the young Muslums away from the charm of terrorism. Like many times in history, behind a totatlitarian ideology (as is by the way the murderous fundamentalism) there always exists a thought that charms its followers. The terrorist who uses suicide as a weapon to kill the highest number of people does ot decide to do so because he is a madman or a depressed guy, but out of a profound conviction. Unless we face the ideological paradigm that leads the terrorist's deeds it will not be possible to defeat this phenomenon. This is why it is important to bring about and popularize the actions of those Arabs and Muslims who have rescued human lives during the attacks, as they show us a better life is possible, when we accept the plurality of human condition and when we take care about the others in this existence, and not in an imaginary paradise after death - as bravely assessed by two great Arab writers, Yasmina Kadra and Kamel Daoud. The terrorist who turns into a human bomb is not a martyr fighting for dignity, but a murderer who destroyes the humanity, as pointed out Yasmina Kadra in his book The attack. This is the key point of a cultural battle against the mediatic propaganda of the terrorists.

Why do we want this Charter of Values to put at the center the figures of the Righteous of our time? It is precisely the serious crisis we are experiences that recalls us to the urgency of such topic. The Righteous people act on the scene when a void emerges in society, as well as in the institutions.

In the face of the indifference and impotence of the world, these men take charge of the issues in first person, indicating with their own exemplary figures the route to undertake. Those who rescue the migrants and struggle fro integration, those who rescue people in the attacks, those who respond to the rising tide of nationalism, those who tried to alert the world during genocide, they call us to our personal responsibility.

It is thus up to us to transform these anticipating signals of a different and more humane world in a common feeling.