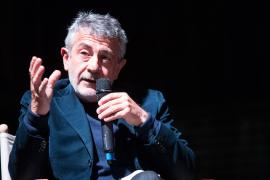 Alberto Negri during the conference

There are some important dates that help us retrace the origins of our current situation and define our current situation, which may sum up a little bit my short adventure as a journalist, that started with a journey to Iran in 1980.
The key year was1979, when the Iranian revolution started, and Islam broke into the news rooms. ’Islam breaks into the newspapers' editorial boards, the media outlets. What we see unfolding is in facts the political realization of a religious utopia that we thought had been set aside and never accomplished – as Iran had never been governed by the clergy in its history, and it was the first time they went on power.”

Even more important is what happened a few months later. In December 1989, the Soviet Union invaded Aghanistan to support a filo-Soviet government. Thus we see the start of a scheme that we will carry with us for a long time.
This is in facts the great occasion, for the US and the West in general, to land a blow to the Soviet Empire. The Americans led the operations, the Saudis funded them, while Pakistan provided the platform of the mujaheddin who would fight against the Red Army. Those mujaheddin warriors who fought against the “Empire of Evil” and would become heroes for the West, some decades later would be called barbarians.
This outlines a very important scheme, which is doomed to repeat itself.

One year goes by and we enter 1980. I came back from my Iran journey some weeks before Saddam Hussein attacked the Islamic Republic, in a conflict that would cause millions deaths and reproduce some of the past wars between Shiites and Sunnis, albeit in a modern feature. Although they did not line up openly on the side of Saddam, the West provided Iraq with weapons in the attempt to pull down that Islamic Republic. Such support was rather apparent also in terms of funding: Iraq received about 60 billions dollars from the Gulf monarchies in those 8 years of war. At the end of the conflict, Iraq would have a foreign debt of 80-90 dollars, Iran only 7. The question about whom we had supported has a clear answer.

At the same time, in Europe, we witness to the collapse of the Berlin Wall in 1989. As a proof of the force of the “scheme” inaugurated in Afghanistan, a Pakistani general of the secret service, Hamid Gul, was sent a piece of the Wall with a message from an American friend written on: “We owe the collapse of this Wall also to you”.
This is why they had supported the struggle against the Soviet Union that later with its satellites would collapse together with the Berlin Wall.
1989, however, saw also an event that should have caught our attention: Slobodan Milosevic's speech at the Field of Blackbirds for the 600th anniversary of the battle between the Serbs and the Ottomans. On that occasion Milosevic opened the can of worms of the break-up of Tito's Yugoslavia. Observers immediately explained Yugoslavia's disruption with the ethnic and religious factor, thus leading to the very collapse of the multi-ethnic principle, the ideal of coexistence that stemmed from Tito's partisan war. Moreover, it is precisely than that the first jihadist appear, in the heart of Europe.
I perfectly remember on 28 February 1992, the referendum in Sarajevo. The following day I went to Mostar, I had breakfast on the river, then a murder in front of an Orthodox church unleashed the massacre. We could not leave the city for one week, and when we managed to do so we started seeing in Travnik the men with the Kalashnikov brought there by the Croatians – i.e. by a Catholic state that wanted to use them against the Serbs. All this then was multiplied after Srebrenica, the worst massacre in Europe since WW2.

Within this framework, we see also the rise of a series of myths: in 1979 the myth of the Islamic revolution in Iran and that of the mujaheddins, who then in 1989 would defeat the Soviet Union and get it to withdraw from Afghanistan back into Uzbekistan. This myth was created thanks to us, and the money of the Gulf monarchies.

On 11 September 2001 we find the outcome of all this, and the protagonist of the terror attack is Osama Bin Laden, the man who in 1989 lived in Peshavar and was an objective ally of ours – an ally who with its bulldozers had helped dig the famous tunnels where the mujaheddin of that time used to fight. The Algerian tragedy, too was an outcome of the war in Afghanistan, because the first Algerian terrorists were precisely the veterans from Afghanistan.
It is a thread that continues and reaches over to 2003, in Iraq. Soon after the entry of the Americans in Baghdad, there had already been the first suicide attack. The story that we have then seen unfold had already begun.
It is not surprising that the very Caliphate had inside some former officials of the Baahtist party, such as Izzat Ibrahim al-Douri, a very religious man, who ran this alliance between Al Qaeda from the two-river land, founded by al-Zarqawi – murdered in 2006 – and those Baathist officials who then gave rise to the Caliphate in Iraq and Syria.
Once again, the scheme hits.

In 2011, when Iraq had already been ravaged with thousands deaths, the war in Syria broke out. The revolt, a legitimate popular revolt against a harsh, even brutal regime, soon became something different, a sort of a proxy war of Iran's most important ally – Assad. The smoking gun is that of the American Ambassador to Damascus, Mr. Ford, who on 6 July 2011 had a walk amidst the (anti Assad) rebels of Hama. No one had seen before an American Ambassador do the same in a hostile country and above all in the Middle East: rebels had become his true escort.The following day also the French ambassador came to town.
It was apparent that the scheme we had seen in Afghanistan had repeated itself, within the framework of the famous leading from behind strategy of which the then State Secretary Hillary Clinton was the theoretician and the practitioner. There are hence the well-known fund providers, Qatar, Saudi Arabia – joined some more Gulf States, as well as private fund providers – and the role as revolving platform of the guerrilla that once had been played by Pakistan was up to Turkey this time. They have created another Afghanistan, but this time at Europe's door.

The phenomenon of the foreign fighters thus suddenly comes closer to us again. The, to enlist as foreign fighter, you had to undertake quite a long journey, today a low cost flight to Turkey suffices.. Here are thus the new jihadists, from Europe, Chechnya, sitting in the cafes of Antiochia.
Within this framework, religion and culture can play an improtant role, but many of these foreign fighters had only a basic knowledge of Islam. The Couachi brothers, protagonists of the Paris attacks, were guys coming from the periphery who, if they had a chance to leave that fringe, would do, but then had radicalized in their frustration.

The war between Iraq and Iran, the current context in Iraq and Syria, are here to prove that some passages of these past 38 years have somehow created a situation in which we have not been accomplices, but rather proper key actors of the scene. And this makes it easier to understand a major part of the resentment and disruption that are there above all in the face of policies that never change, and seem even more rigid than any holy text. We have carved on the stone the idea that we had to prevail on others, and this, too is a form of religion.