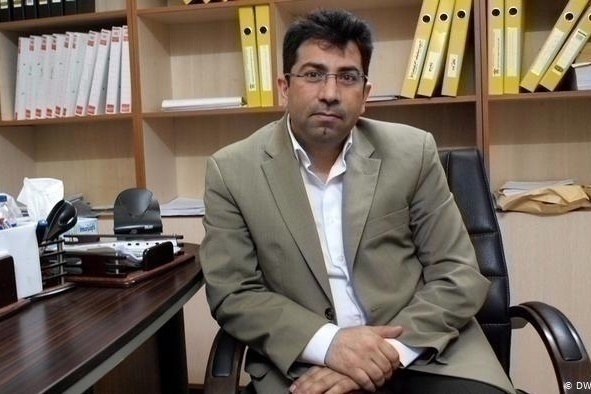 We are in August 2014, at the dawn of the first genocide of the new millennium, the one carried out against the Yazidi minority. Islamic State militiamen lay siege to the Sinjar region of Iraq, slaughtering thousands of civilians in just a few days, and kidnapping just as many women and children. Mirza Dinnayi, an activist native to the region and resident for many years in Germany, knowing the territory well, personally guides the pilot of the helicopter committed to saving lives from an inhuman siege, where people die not only from weapons but also from hunger and thirst.

Shortly after takeoff, Dinnayi's helicopter crashes. The Yazidi activist miraculously survives, with a broken leg and ribs. "It was as I lay in the wreckage, surrounded by the carnage of the ISIS occupation, that I realized more than ever what was at stake, and was driven to commit my life to saving the neediest in my community," Dinnayi writes. Emergency transported to Germany, thanks to a rescue system he created for survivors and victims, he will soon return to Iraqi Kurdistan, in a wheelchair, to continue his work immediately.

More than a thousand Yazidi women and children, thanks to Dinnayi, are evacuated and transferred to Germany, where they are also given psychological assistance. Among them is Lamiya Haji Bashar, a future human rights activist and Sakharov Prize winner. "It's the best work you can do," Dinnayi tells in an interview, despite the fact that he has risked losing his life many times to save victims, and despite the fact that "their suffering will remain engraved in a part of your soul forever."

It is also thanks to Dinnayi's efforts that, while the genocide was still underway, Winfried Kretschmann, governor of Baden-Württemberg, decided to open the doors to Yazidi girls who had been abused and enslaved by ISIS. The southwestern German state, a unique case in the world, invests 95 million euros, nearly one percent of its annual budget, to cover the costs of selecting, treating and transporting 1,000 Yazidi survivors and their children, and to provide them with two years of care and therapy after arrival. Among them was future Nobel laureate Nadia Murad, who, when I interviewed her near Stuttgart in 2015, confirmed how much Kretschmann had taken the suffering of the Yazidis to heart.

It is also Dinnayi, with the help of the Kurdish-German psychologist Jan Ilhan Kizilhan, who had experience working with rape victims from Rwanda and Bosnia, who carried out the selection of Yazidi girls to be brought to Germany for protection and care. An enormous responsibility for him: when word spreads, in a community on the verge of collapse, that Dinnayi has the power to offer a new life in Germany, far from persecution and violence, requests and offers of all kinds pour down on him, in many cases justifiable, in others not. Even the German psychological recovery program is not at all simple and finds, as some social workers who have worked on it tell me, various resistances on the part of the victims; something inevitable, if we think of the difficulty that many survivors of the Shoah and the Armenian genocide had - for a long time - in facing and recounting memories of violence bordering on the ineffable.

Dinnayi's extraordinary commitment began well before the genocide, when once again the small Yazidi community - persecuted many times over the centuries - fell victim to Islamic fundamentalism. It is August 14, 2007, when four vehicles loaded with two tons of explosives hit the Yazidi villages of Qahtaniya and Jazeera. One of these is a tanker truck full of fuel, which guarantees maximum devastation at the moment of the explosion. Impressive the number of victims, making it one of the bloodiest attacks in the history of the Middle East. There are many hundreds of dead, more than a thousand according to the estimates of the NGO Yazda, and more than 1,500 wounded. The villages involved in the attack were reduced to a heap of rubble, while terror gripped the Yazidis, who understood - after all the doubts had been removed - that they were at the center of a campaign of hatred that risked the very survival of their community.

The attack, carried out by al Qaeda militiamen, pushes Mirza Dinnayi to take action, always starting from Germany: he begins to collect funds for the victims and publishes a request for help in a German newspaper. Two German hospitals respond, offering free medical assistance to injured children. The main problem remains their transfer to Germany, complicated by the fact that many of them have no documents. This prompts him to found the organization Air Bridge Iraq (in German, Luftbrücke Irak), whose name is inspired by the air bridge put in place by the Americans in 1948 to break the blockade imposed by the Soviets on West Berlin. Even before the genocide of 2014, Luftbrücke Irak is helping 150 Yazidi children and women receive asylum and medical care in Germany.

Mirza Dinnayi has received many recognitions for his commitment: from his appointment as the advisor for religious minorities to the Iraqi presidency to awards such as the Staufer gold medal obtained by the governor of Baden-Württemberg in 2016 to the Aurora Award for Awakening Humanity, received in 2019. A commitment that has been valued not only in Iraq and Germany, where his experience has helped to give birth and grow other realities and projects but also in Armenia, recovering from the humanitarian catastrophe of the recent war in Karabakh. Here, in the last few months, Dinnayi has brought his experience of more than a decade of work with victims of trauma and violence.

The bond of solidarity between Armenians and Yazidis is ancient: just think of the figure of Hamu Shiru, leader of the Yazidis of Sinjar honored in the Garden of the Righteous in Milan, who saved the lives of many Armenians during the genocide. And, not by chance, Armenia was one of the first countries in the world to recognize, with a parliamentary resolution, the genocide of the Yazidis. As Dinnayi recalls in an interview, survivors of all genocides have something important in common: "Chosen to survive by destiny, they have a duty to fight for the rest of our human community."