a "place for hope" 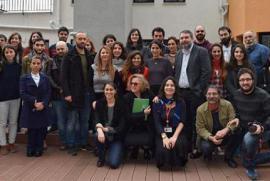 Agos Editors in front of the new headquarters of Hrant Dink Foundation (http://www.todayszaman.com/national_agos-hrant-dink-foundation-christen-new-home_376162.html)

A "place for hope" to keep on struggling for democracy, freedom of expression and the defense of human rights in Turkey and all over the world. This was the concept which Hrant Dink Foundation built on to inaugurate its new seat in Istanbul. On the Centennial of the Armenian genocide the new centre aims at "highlighting the cultural heritage of a people that was uprooted and eliminated from its homeland, and the contribution it gave to science, arts and society in general through scientific, academic and historical research".

The Foundation, not by chance, moved to the building of a former Armenian elementary school - Anarad Hığutyun - that had been closed for lack of enrolling, and now it will host also the editorial board of weekly paper Agos, founded and directed by Hrant Dink, the Turkish-Armenian journalist who was murdered on 19 January 2007, to whose memory the Foundation is dedicated.

It is a 4-storey building, with a surface of 800 square meters, and it is equipped with study rooms, an archive, a library, an exposition room, a conference room and it will be able to host language courses, workshops on the cultural heritage of Anatolia, on Armenian history and culture, meetings to improve the very relations between the two communities and initiatives against racism and nationalism, involving people, groups and organizations that share the same goals as the Foundation.

Journalists, students, researchers will be granted access to documents, texts, pictures and video footage concerning  the Armenian community, gathered over years of activities of the Hrant Dink Foundation and Agos.