in sight of 100th anniversary of the genocide 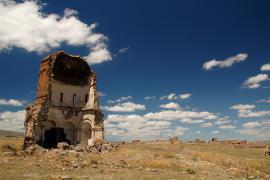 Ani, an ancient Armenian centre which nowadays is in Turkey

On April, 24 1915 in Constantinople, hundreds Armenian intellectuals, politicians and clergymen were arrested and murdered. Ever since this has been the day to symbolically remember genocide, and the Armenian communities worldwide commemorate this sad recurrence through meetings to remember the victims.


Nearly a century afterwards, the Turkish government does not recognize the genocide, yet. Despite this, Turks and Armenians are not giving up dialogue, as shown by two major initiatives.


The Genocide Museum in Yerevan has decided to dedicate a section to the Turkish and Kurdish Righteous who have rescued Armenians from persecution. In the Museum's restoration plans the key element is the will to bring out this historical phenomenon of Righteous people try to protect their Armenian neighbours and friends, at the price of their security. This choice reveals the will of the Armenians to look at the past without identifying the evil or good just in one part, but keeping a broader and more complex vision of reality.


Some signals of change also come from Istanbul. For the first time in fact a diaspora delegation will officially take part in the April, 24 commemorations in Turkey. Negationism in Ankara is still there, and the official presence of the Armenian community at the Istanbul event is a step for the Turkish civil society to come closer to the issue of genocide.


The three-day event will take place from 21 to 24 April and will involve besides many Turkish groups and media, also Hrant Dink Foundation and the publishers of Agos, the magazine founded by the journalist murdered in 2007.


The event comes within the path set out by the International Conference Armenian Genocide: Challenges on the Eve of Centenary, organized on 22 and 23 March by the director of the Dzizernagapert Memorial, Haik Demoyan. The conference, which witnessed the participation of Ragip Zarakoglu, the Turkish publisher who was jailed for his texts about the Armenian genocide and human rights in Turkey - and widower to Ayse Nur Zarakoglu, Righteous honoured in the Milan Garden - was attended also by Pietro Kuciukian, Gariwo co-founder and honorary consul of the Republic of Armenia, who presented the projects of the Italian Armenian Community and held a report entitled Why honour the Righteous for the Armenians.