Who is righteous enough for Yad Vashem? 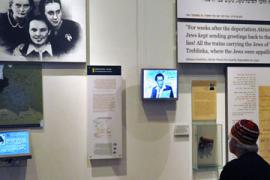 We propose the piece appeared in Haaretz following the publication in the same paper of Judy Maltz' article entitled as Who is Righteous enough for Yad Vashem?. It was written by Baruj Tenembaum and Eduard Eurnekian, Founder and Chairman of International Raoul Wallenberg Foundation, and it points to some "inconsistency" in Yad Vashem's way to recognize (or not) some people as "Righteous among the Nations".

"In the past few years, we at the International Raoul Wallenberg Foundation have submitted a large number of well-documented dossiers to Yad Vashem dealing with hitherto unknown or poorly substantiated cases of rescue. A significant proportion of those cases were crowned with success, namely their protagonists ended up being recognized as Righteous among the Nations. Other files, however, got dragged into some kind of an attrition struggle or sheer deadlock in what could be described as an "arbitrary" approach by Yad Vashem.

Most of the stalled cases are related to high-profile diplomats who, in our view, went out of their way to save innocent lives. In this category, Yad Vashem does not require the diplomats to have put their lives on the line, but instead, they should have acted against their superiors s instructions, thus risking their own careers.


On the face of it, these sets of criteria seem logical and plausible, but there are some practical problems:

1. It is not always easy to ascertain whether a diplomat was risking his/her own career. This is a matter of perception. Sometimes, like in the case of several Spanish diplomats postulated by us, such as Sebastian de Romero Radigales, Bernardo Rolland de Miota and Julio Palencia, it is clear that they did not follow orders from the Franco regime and even contradicted them, but on the other hand they were not apparently punished for the simple reason that Franco was shrewd enough to try to appropriate their courageous actions when he understood that the Nazis were doomed.

2. Other cases are even more subtle, such as another one we submitted to Yad Vashem, pertaining to Angelo Roncalli (later known as Pope John XXIII) who during his days as Apostolic Delegate in Istanbul, in WWII, relentlessly worked to save Jews, a fact which is not disputed by Yad Vashem. It is difficult to say that Roncalli did act against the instructions of his superiors (although far from being encouraged by them), but on the other hand Yad Vashem itself claims that Pope Pius XII (Roncalli s ultimate boss) had stood idly by in front of the Nazi atrocities. So why is Yad Vashem reluctant to even bring this case to the Commission of Designation of Righteous?

3. Most disturbing is the lack of consistency displayed by Yad Vashem.

Most of the diplomats who had been recognized as Righteous among the Nations, with very few exceptions, did not act in contradiction to their superiors orders and were not punished for their deeds. So why have the rules changed? To be fair, Yad Vashem has accumulated vast experience and encountered in the past a great deal of problems in the selection process, so we are aware that this is not a black-and-white situation.

To be sure, the "Righteous among the Nations" project is a blessed one as it highlights gratitude and the recognition of good, but on the other hand it is high-time for Yad Vashem to apply a more consistent selection policy".