A Righteous under Yad Vashem's scrutiny

Are some Righteous less 'righteous' than others? 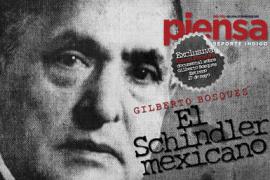 Raoul Wallenberg Foundation made us aware of the tale of Gilberto Bosques Saldívar, a Mexican diplomat who implemented, as he wrote in 1944, " the policy of my country, helping, giving material and moral support to the heroic advocates of the Spanish Republic, of the brave paladins of the struggle against Hitler, Mussolini, Franco, Petain and Laval." As a consul in Marseilles he allowed many Jews and antifascists to flee to Mexico forging documents for them. This is why the Germans confined him in Bad Godesberg for one year, violating the Convention about the treatment of foreign diplomats during conflicts.

There are many documents that provide evidence of Bosques' righteous deeds. They include the letters and pieces of testimony of dr. Alfred Kantorowicz, a Jew whom the consul hepped flee (see box), scholars like Renata von Haffstengel and Cecilia Tercero, co-founders of the Institute of Germany-Mexico Research, and more.

Thanks to the commitment of Wallenberg foundation, a street in Vienna was dedicated to Bosques. Ceremonies in his honour were also held in many world cities such as New York, Buenos Aires, Caracas, Mexico City and more. A goal of the Foundation is thouth the recognition of Bosques as Righteous among the nations by Yad Vashem.

Unfortunately, it is not that easy to honour Gilberto Bosques in Jerusalem. As underlined by Judy Maltz, the niece of a Holocaust survivor and author of a documentary about the Righteous, in Haaretz, the Jewish Memorial of the Holocaust has very strict criteria.

In order to be recognised as a Righteous, a Gentile must match the following requirements:

“1. Active involvement of the rescuer in saving one or several Jews from the threat of death or deportation to death camps;
2. Risk to the rescuer’s life, liberty or position;
3. The initial motivation being the intention to help persecuted Jews: i.e. not for payment or any other reward such as religious conversion of the saved person, adoption of a child, etc.; and
4. The existence of testimony of those who were helped or at least unequivocal documentation establishing the nature of the rescue and its circumstances.”

Yad Vashem, says Judy Maltz, "must impose strict standards when designating a non-Jew as a Righteous among nations, because otherwise the title would be cheapened". For example it rejected the nominations of Khaled Abdul Wahab and the rescuer of Maltz' grandfather, Wilusz Halamaj, for "lacking evidence". Moreover it gave a very restrictive interpretation of point no. 2. So for instance, Khaled Abdul Wahab, who took into safety to his Tunisian farm 24 Jews after learning one of them was about being raped by the SS and taken to a brothel, was not deemed to be a Righteous because he would have not run enough risks (the Commission's reasoning states that the Germans went everyday to his farm to control his Jewish guests; had they been in Europe, only the fact of finding some Jews at his home would have prompted to kill or deport everybody immediately).


In Gilberto Bosques' case in particular, besides the alleged "lack of evidence", Yad Vashem also considered the fact that the diplomat did not disobey his government's orders to rescue the Jews. Therefore he is not considered as a "Righteous" despite the documents and pieces of testimony, that were also filmed and broadcast on tv in many countries, and onky becayse he did not disobey President Lázaro Cárdenas.

Judy Maltz wrote in her Haaretz article that "All they (or, more likely, their descendants today) receive is a medal, a certificate and a plaque in their name at Yad Vashem. Neither are there any limitations set by law on the number of rescuers that can be honored". There is an ongoing debate that must continue. It is important that Jerusalem's Memorial accept to check out the evidence, supported by historical analyses as well, that was presented by Raoul Wallenberg Foundation, in order not to waste the immense value of Bosques' commitment in favor of the persecuted, that was retributed by the Nazis  with the deprivation of his diplomatic immunity. Moreover, Bosques has at least one thing in common with the other Righreous, and it is possible to see it precisely in his "obedience" to the instructions of his President: patriotism. There are quite many Righteous who were motivated among else by the wish not to sully their countries or their religious or political faith.