The Righteous show us that goodness is possible 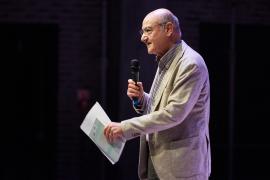 Following we publish the remarks by Gariwo President Gabriele Nissim during the presentation of his new book “Il bene possibile” (Utet), on past 21 May at Franco Parenti Theatre of Milan.

First of all, I would like to thank Andrée Ruth Shammah, Massimo Recalcati and Salvatore Natoli, but also everything who helped me build up my work about the Righteous in Italy, as this is the message of my book: doing things together, because no one creates anything alone. I would also like to thank the Tito Livio School of Milan and my wife Santa, whom I took as references for my book.

The key issue I sought to address is that of giving some references to the youths, but the mechanism was not focused on offering them any models. When I tell the tales of the Righteous, in fact, I have a lot of fun: first I tell them some important stories, like the one of Peshev in Bulgaria, that of Havel in Prague, the stories of Etty Hillesum or Armin Wegner, who have gone down history for taking up responsibility, and changing things by their deeds. Yet I enjoy very much explaining above all the contradictions of these characters. Giorgio Perlasca may have saved the Jews not really because he loved them, but rather because he was in love with a Hungarian girl in Budapest. Armin Wegner wrote his protest letter to Hitler, but when the Nazis beat him up savagely he wrote a second letter, a sort of an abjuration, saying he was ready to go back on Hitler’s side. Dimitar Peshev, in Bulgaria, before saving the Jews had voted for the racist laws, had said Hitler was a great statesman, and only afterwards he had felt a remorse.

I insist on this point because we don’t have to hallow the Righteous. I believe there is a perverse mechanism, which is there in the Jewish world, as well, that seeks perfection, the politically correct Righteous.
This attitude is yet wrong because if we pass on the idea that the Righteous are equal to us, with faults and contradictions, we show that goodness is possible, that we are fragile human beings, we have a limited life and we cannot be perfect heroes. If we pass on this message, thus, we prove there is a possibility to be Righteous in the key moments.
This way, the distance between the Righteous and some common individual is reduced, and responsibility increases. Those who fail to do some possible things, bear more responsibility than those who do not do impossible things. Those who are indifferent to the Jews – I use this term to recall the word INDIFFERENCE engraved at the entrance of Milan’s Holocaust Memorial – are not those who do not have wanted to die for them, but rather those who turned a blind eye. So there, if we pass on the idea of a common and not heroic Righteous, we also pass on the idea of a possible goodness, which becomes irresponsibility when people do nothing despite having the chance of acting for good.

As also Mr Recalcati wrote in his recent book about sacrifice, the Righteous does not sacrifice himself for the other but takes a stance because he does not want to sacrifice the very humanity he keeps inside. He or she does not act out of love of his neighbour and because he is willing to die for him, but simply because he or she does not want the idea of plurality that is inside him to be set into a crisis. This is the secret of many deeds of humanity that have taken place: people do some gestures because they want to feel well with themselves. And this mechanism is the opposite of the one of sacrifice.

Himmler, and the terrorists have something in common: they incite to sacrifice. The selflessness they preach is nothing but the sacrifice of one’s sense of pietas in the name of an ideal. Massacring the Jews thus becomes acceptable in the name of a grand project to which one sacrifices his own conscience. The Righteous puts this scheme upside down: whereas Hitler demands the sacrifice of human beings, the Righteous do not want to sacrifice their humanity.

The big problem is that totalitarian regimes always present themselves as gardeners who want to weed the garden and make it bloom. This mechanism always repeats itself, from Armenia to Rwanda, to the Holocaust, to Islamic terror. There is always something in common: the idea that by eliminating people you create happiness on earth. Absolute evil, though, in the end, does not win. As Vasilij Grossman said after witnessing the crimes against the Jews and the Gulag, it cannot win because it cannot destroy the true human nature. And this is always a great hope.

Primo Levi quoted the Promessi Sposi when talking about the concentration camps, to recall the worst scandal of the executioners, the one of corrupting the victims. In fact, by quoting Manzoni, he says: “The provokers, the browbeaters, all those who anyhow do wrong to the others, are guilty, not only for the evil they commit but also of the corruption, to which they bring the souls of the offended.”
There is hence this big problem, again according to Primo Levi, i.e. that the great challenge of the victim was that of not hating and not having a spirit of revenge. One thing is resisting, one other thing is becoming similar to an executioner. This is why in my book I quote the story of Etty Hillesum, who was not understood – even by a great essayist such as Zvetan Todorov. Then the paradox is this one: in front of evil, also victims bear responsibility.

When we talk about the Righteous, usually we mean those who acted under extreme circumstances, but actually, the Bible’s formulation about the 36 Righteous who keep the fate of the world in their hands means that these individuals are those who act to prevent evil. One thing, in fact, is to act when evil has already occurred, another thing is instead preventing evil when it is ongoing.

Today we need these 36 Righteous. For the first time since the end of the dictatorships, history is heading in a negative direction. We see the rise not so much of totalitarian ideologies such as those of the Thirties, but of a culture that puts individualism first (an example of this is Trump’s motto, America First). I learned from Zygmunt Bauman that in order to understand the world, you need to observe the particular behaviour of people; let’s then look at the social networks, fertile soil for a culture of enemy, hatred and contempt. In the face of all this, we must watch and do what Salvatore Natoli always warns us to do: anticipate good with behaviours opposite to the ones that are proposed by society.
We must not only indignate about those who perform bad deeds; when values are questioned and references fall, you must educate those who are behaving ill. Stepping in therefore does not only mean to defend the victims or struggle for plural society, but also confront those who are bringing history in a wrong direction.

This is why in my book I mention two exemplary stories. The former is that of Dimitar Peshev, Vice-President of the Bulgarian Parliament who saved the Jews of his country; but in this case the hero is no more Peshev, but rather his friend Jako Baruch, who goes to his home and informs him about what is about to happen to the Jews, until Peshev goes to the Parliament and interrupts the machine of deportation. This teaches us that, today, in the face of mechanisms, which we are witnessing to in our society, we must be like Jako Baruch, and first of all educate those who deny culture and talk about the apocalypse.
A similar approach was the one of Etty Hillesum, a Dutch Jew. Interrogated by the SS, she asked herself how to educate the guards who stood in front of her. “How did you get to such stances?” wondered Etty. “I feel some pity for him, because if the reasons this way if he shouts, it means that he is an ill person.”
Those of Jako Baruch and Etty Hillesum were extreme situations, but in the face of the challenges of our time, we must educate also those who take a wrong route.

We do not know where the train of history goes, but our duty is to take on the responsibility. I often quote Shakespeare to say we are all called to act in our time. But I also love to quote Milena Jesenska, Kafka’s beloved woman, who reproached the Prague intellectuals to be narcissistic and having themselves applauded in cafés rather than dealing with the world that was heading in a bad direction. I believe now we all are called to take up this responsibility, and this is the meaning of the discourse of the Righteous that Gariwo has put forward for many years, finding obstacles but also many friends.

My dream is that this discourse becomes a beacon of Italian politics. I would like our country to inaugurate many Gardens of the Righteous as we did in Warsaw, Tunis, and Jordan. Italy is the country of beauty, I would also like it to be the country of the diplomacy of good.