The Righteous and the inviolability of life

the words of Massimo Recalcati 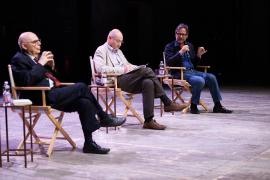 Following we publish the transcript of psychoanalyst Massimo Recalcati’s remarks, at the presentation of Gabriele Nissim’s new book, “Il bene possibile” (Utet), on past 21 May at Franco Parenti Theatre of Milan.

My opinion, for some time now, is that our time is the one of the evaporation of the father. It is a formulation of my mentor Jacques Lacan, and it is also one of the key features of our era. This means that the time of ideal models that orient in an infallible way, like pre-determined compasses, the behaviour of individuals and collectives, is behind our shoulders, has expired. Thus we are no longer faced with the infallible word of the father, but with a void. The disconcerting experience that characterizes our era both at the level of individual psychology and at the one of collective psychology, and institutions as well, is that today we are experiencing a void.

Nanni Moretti had portrayed this in a plastic manner in one of his recent movies: Saint Peter’s balcony does not host any longer the determined word of the father/Pope who leads his faithful, but that of a father that starts crying, huddles, looks like a scared child. And then – and this is what I found most precious in this book – in the time in which Saint Peter’s balcony is empty, and in the place of the father as a role model, the father as a commandment, the father as the foundation of law, there is an experience of precariousness, of insecuritas. What remains? The Righteous’ testimony remains.

I will go on a clinic digression to underline that the ideal concept of a perfect, accomplished life, a society without disorganization, is a perverse ideal. The major totalitarian regimes have this image of society and the collective a perfectly working machine. Pursuing perfection in politics means producing monsters; in case, we should deal with the organization of the element of uncertainty, precariousness, but not with reaching a perfect accomplishment.

The Righteous, in the end, shows against the nightmare of exemplarity that the value of testimony is only retroactive, i.e. you cannot decide yourself to be a witness, you rather find yourself to be one, and therefore the deed becomes testimony only for those who are witness to it, so, for example, for the lives saved by the Righteous’ deed .

I am also struck by the fact that this eccentricity in comparison with an ideal paradigm shows the sensitiveness that the Righteous have about people’s names, faces, individual people one by one. If we think of it, what is the true madness of every form of totalitarianism, fundamentalism, or ideological declination? It is its tendency to forget about the faces, names, and bodies. When politics goes far from all this it becomes a hellish, totalitarian politics, that sacrifice the right of the individual in the name of the universal. The Righteous on the contrary always thinks by reversing this relationship and putting the inviolability of life in the foreground.

The Righteous, by their deeds, show that there is never a necessary reason to sacrifice a life, even for a lofty ideal, because otherwise, we would enter an absolute contradiction: the ideal, in fact, is to make life inviolable.

It is not by chance if, in the Mein Kampf , Hitler wrote a key chapter, The spirit of sacrifice. Hitler was a great singer of such a spirit, embodied more than others by the “Aryan”. The “Aryan” is eager, in the name of the cause, of the universal, of the superiority of the race, to sacrifice his modest self in the face of the fate of Great Germany. And this is the feature, against which the Righteous step in: there is never a reason to sacrifice a life.

This means forestalling that mad pair, that inspire for instance the Mein Kampf as well as any politics of hatred - by which our country is unfortunately overcome -, i.e. the opposition between the superiority of the pure and the inferiority of the impure (between the caste and the anti-caste if we ought to express an elementary political declination). Then the totalitarian gardener, says Nissim in his books, weeds the garden to bring about in the garden only the pure part of the flowers that have the right to exist.
We, clearly in a different form, are in the face of a similar wind that is blowing from the United States to our Europe. The temptation to build a wall, to set a Manichean separation between pure and impure: this is the temptation of evil because when one moves around in the world thinking he or she is pure, there is no more limit to the evil he or she can commit.