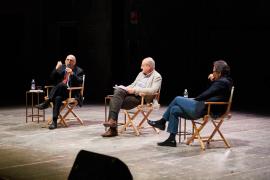 Following we publish the transcript of the remarks by philosopher Salvatore Natoli at the presentation of Gabriele Nissim’s new book, “Il bene possibile” (Utet), on past 21 May at Teatro Franco Parenti of Milan.

The research and discourse about the Righteous date back to the years of my youth, I have talked about these things with Gabriele Nissim since earlier than the publication of his first book. I am not only interested in this important topic but also involved in a friendship. This is the first way we have to meet with a face, and it is the deepest one as well – the first and the last one because it is also the most intense. By the way, according to Montaigne’s paradox, in friendship “the mirror is such that only one can be your friend”. This deep statement then turns out to be wrong, for the very fact that we are many, and our friend cannot be one, because due to our complexity, everyone reveals to us an unknown dimension of ourselves.It is important to tackle this issue of the encounter, in which you look at yourself in a sort of a mirror when it comes about the Righteous, who represents the friendship of the human race.

I will start my remarks by discussing the title of the book “Il bene possibile”(The Possible Good), which seems to be clear but immediately introduces a complex issue. This for two reasons. First of all, because there is the word Good, and, as Massimo Recalcati correctly put it, the Good is an abstraction. As it is placed in the title it is not an explanation, but rather a problem, an instruction: there is something that we call the Good, but it tends to be abstract. In the book instead, the author deals with the Good in a different form, that of goodness, which is an action. The good human being performs acts of goodness, thus it is always identified, it can never be abstract. The Good can be an idea, whereas goodness is not, it is always an action. The other problematic dimension of the title is the word “possible”. When we say something is possible, we can give a diminishing interpretation of this term. “The possible Good” can thus be meant as “I can’t do anything more”, “I can’t do anything better”. The Righteous who have acted instead have indeed done something more, they did not limit themselves to say “this condition makes it impossible to me to act”.

Goodness is overflowing and, in particular, it surfaces precisely where the need is the direst. Where the highest instance of goodness is expressed, the need is direst. Goodness is called, even more under the most extreme circumstances, because there you need more to be done. “The possible” hence overcomes its boundaries: where is the limit of the possible? It is the instance of the moment to define possibility, the urgency of the moment, which, in a deeper understanding, is called “the call”. The Righteous responds to an urgency.

In a strict sense, this is a gnostic attitude: those who think they are on the good side say: “I am the true spark”, “I do some cleaning”. This is why absolute evil can only be in the delirious intention of the subject who feels he owns the Good. And yet, strangely enough, and this is the feature I am most interested in, absolute Evil cannot exist in reality. It is the raving of the self-righteous. But why cannot it actually exist? Because, fortunately, it fails. If it could exist, it would already have won, but we are finite beings, and fortunately, we are such also in evil.

This means we do not have the strength to produce an absolute evil. And what is the proof of this? It is that when evil overcomes a certain threshold, Justice calls, the Righteous person is born. The Righteous are the living proof that evil in re, in reality, cannot be absolute, but it is only the raving of those who believe they are the absolute Good. Totalitarianism did, in fact, fail, in the face of an evil that has crossed the threshold the Righteous have responded, because, to use an expression by Adorno,“ they could not bear that life be offended.”

And what is the standard of the Good? How do we recognize it? There must be a discernment, an intelligence of Good, otherwise, the Righteous would only act out of pure instinct, without a result, without a strategy. But how can you discern Good? You can do so when you see that life is in danger. There are moments, in which offended life appears, in the harshest punishment: totalitarianism, the Gulag, terrorism. This threat though can also surface in daily life. If a raving can rear its head it is because already in daily life, faces were not seen. This is why the Righteous, the true Righteous, cannot be elected even by those they have rescued, because being daily, the Righteous cannot be known. And yet, if these everyday Righteous exist, injustice will never arise.

These figures are not witnesses but have created witnesses, they have not acted in order to assess, state or declare, but out of urgency, because life was being offended, and there was thus the call. The rescued, and about this, there are beautiful pages written by Gabriele, have not always born testimony. Like in the episode of the clockmaker of Warsaw, where the one who had received the act of goodness did not bear testimony. It is the ungrateful who fails to bear witness: if the Righteous acts on the urgency of a life that needs to be kept, the rescued should say: “He saved me!”. Under extreme circumstances, where the rescued are numerous, it is the extreme feature of the situation that makes the Righteous and his deed known. But the everyday Righteous are unknown, theirs is the individual sanctity, the respect of every face at every life stage. If this exists, it represents the antidote that makes it possible to forestall absolute Evil, which tends to be haughty. Evil in fact, as the old theology said, “stems from the act of haughtiness”, which is the self-sufficiency of the subject who keeps the world at the mercy of his desire, of a perverse dimension of desire, which is devouring per se. I believe the world is still there, despite all, because there are the everyday Righteous, whom we will never know.

At this point, getting back to the “doing more”, the important thing is that the dimension of the “possible” extends itself, becoming “I must do more and more” in the donation of oneself to the others. It cannot be through the love for the neighbour, a late and contradictory concept “Love your neighbour as yourself” is impossible, because if I love entirely myself I can never completely love my neighbour. In the Jewish version, the expression is not this one, but rather “do for the other what you would like to do for yourself”. At the core, there is not the abstraction of love, but rather action, and goodness.

I found an expression that nicely explains what the Righteous is. He or she is not the perfect human being, has its vices, its small ambitions, but there are moments, in which true offence calls him or her. In the Genesis, then referenced by Ezekiel, there is this sentence: “The righteousness of the righteous will be credited to them”: this is the title of Nissim’s book. It is the credit of Justice to a just action. We will never know if somebody is a Righteous, but his or her deed credits him or her to Righteousness.

Justice judges, and recognizes that life is threatened, but doing this tends to condemnation. Judgement tends to condemnation. In the Bible, Righteous is never of people but only of God. In Judaism, God’s deed of Righteousness is Justice that saves, not that condemns. It is true that to save somebody you must recognize Evil, but the primary act consists in judging Evil, identifying it as such, and saving both the victim and the executioner.

The key thing is to save the executioner because this is the only way to uproot the idea that life can be sacrificed – firstly teaching to him, who needs to be saved. If we all think so, everyday justice, maybe, is what has the best chances to save the world, and this is why it is right to tell about these things at school. Although you can’t say in advance they can have an effect, because, unfortunately, to use a biblical expression, “Evil is huddled beside you”. This must be our instruction for a wise cautiousness, for a finiteness in the very act of performing Good. Humilitas, in the end, is nothing but this.