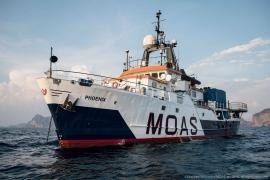 In 2013 casualties at sea along the Central Mediterranean route become a tragic reality in front of my eyes. While I was on holiday with my family, a beige coat -that had probably belonged to someone who could not reach safety- was floating on the sea surface. Soon after, we were pushed to act by the words against the globalisation of indifference in a statement by Pope Francis in Lampedusa and by a shipwreck occurred on October 3rd 2013 that claimed 368 lives. People were dying at sea in a silent and liquid cemetery, but all eyes were focused on disembarkation ports where survivors arrived.

This is how MOAS (Migrant Offshore Aid Station) was created, as an international organisation aimed to mitigate the suffering of the most vulnerable migrant and refugee communities and based on the simple, but essential principle stating that “Nobody Deserves To Die At Sea”. Throughout three years of SAR missions between 2014 and 2017, we have assisted more than 40,000 children, women and men who could have become figures for the statistics of casualties at sea. But, above all, we have shed light on a topic that was highly underestimated at that time and, following a pioneering idea combined with a positive use of technology, we became the first humanitarian organisation to use military drones in order to save human lives along the most lethal migration route in the world.

MOAS has always paid attention to geopolitical developments and to their consequences on migration routes. We have not only provided help in the Central Mediterranean, but also operated in the Aegean Sea from December 2015 to March 2016 when the number of crossings dramatically decreased after the EU-Turkey deal came into force. From October 2015 to May 2016 we have carried out our first survey in Southeast Asia to explore Rohingya catastrophic living conditions in Northern Rakhine, in Myanmar.

From October 2015 to May 2016 we have carried out our first monitoring mission in Southeast Asia to learn more about Rohingya catastrophic living conditions in Northern Rakhine, in Myanmar (or Burma). Since then, MOAS’ sister organisation, Xchange, issued the first reportdocumenting Rohingya daily life in Rakhine amid persecution, violence, discrimination and mass killings.

By interviewing 1000 Rohingya, we explored their limitations in terms of access to healthcare and education system, as well as of working in public administration or having decent jobs.

Since then, we have never stopped monitoring regional developments, as we are now doing in the Mediterranean where the new operational scenario raises huge concerns. This is why last August we decided to suspend our SAR mission to focus all our resources and capacities to support the Rohingya people and we repositioned the Phoenix, that played a major role in delivering 40 tons of humanitarian aid to the Bangladeshi government. Since August 25th around 700,000 people have arrived in Bangladesh after horrific journeys that further jeopardise this minority, which the UN describe as the world’s most persecuted one.

As highlighted by IOM (International Organisation for Migration) in its report “Fatal Journeys, Volume 3”, Chapter 3 “Migrant deaths in the Asia-Pacific are also the by-product of internal conflicts and ethnic cleansing that have captured less Western attention than the conflict in the Syrian Arab Republic and the deaths in the Mediterranean. The reality is that most deaths in the Asia-Pacific continue to occur in large unpatrolled spaces, often – but not exclusively – at sea. The majority go unrecorded, as will be shown in this chapter”. It is enough to check the Missing Migrant project and data as of April 11th to understand that, even though shipwrecks had been reported by news agencies, only 31 casualties were documented, and not all of them were caused by shipwrecks, but also by landmine blasts or car accidents.

However, a lack of reporting not only futher dehumanises migration, but also prevents us from understanding the real extent of what is happening and its potential consequences. In light of this, MOAS decided to expand the scope of our mission in Southeast Asia. While our medical staff daily assists hundreds of patients in both Aid Station of Shamlapur and Unchiprang, we will reposition the Phoenix in the Andaman sea for a one-month monitoring mission before the monsoon season starts. With this mission we will not only understand more about the operational scenario in the region, but our professional team on board will also be ready to act, if any urgent SAR intervention will be required. Based on MOAS’ motto, we will do everything possible so that no child, woman or man will feel abandoned or lose their lives on unsafe vessels.

MOAS appeals to the international community to act and shine a light on the atrocities perpetrated against Rohingya people in the hope of giving them a peaceful future Additionally, we hope to raise awareness on the situation in the Andaman sea and boat crossings in the area, as we had done at Europe’s doorstep. In the meantime, we will support the Bangladeshi community, which is now sharing land, resources and heart with those fleeing unfair persecution and endless violence.

Because Nobody Deserves To Die At Sea.