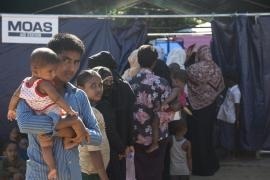 The Aid Station of MOAS in Shamlapur

Cox’s Bazar is a well-known tourist destination in Bangladesh thanks to its beach, the longest in the world, a 120km expanse of gently-sloping, pristine sand. As you approach by plane, it looks like an unexplored paradise. Green dominates the landscape, only interrupted by the blue sky, white clouds and the colourful dots marking buildings and houses. I was impressed by the typical Bangladeshi fishing boat, which recalls the shape of a half-moon, and by the beauty of nature.

Bangladesh has recently hit the headlines due to the exodus triggered by escalating violence against the Rohingya community in Myanmar. Since the beginning of clashes on August 25th, more than 600,000 Rohingya people are believed to have crossed the border with Bangladesh in a desperate attempt to seek sanctuary, among them 340.000 are children. The Rohingya community has faced persecution and discrimination over the years, but the recent scale and extent of violence has forced them to flee in huge numbers. Similarly, the scale and extent of arrivals in Bangladesh has led to a humanitarian crisis, which the UN has identified as the fastest-growing crisis at the global level.

The Rohingya community now forcibly displaced in Bangladesh had to face perilous journeys, taking the sea route or crossing land borders. Sometimes people are forced to cross rivers. Deaths have been recorded along all the routes, demonstrating once again that if you are in real danger, you will do everything possible to save your family and to give your children a better future. Thus, we cannot ignore violence and abuse, no matter where they occur. So, with MOAS we decided to be the voice of the voiceless and help the most vulnerable people.

People wait in front of our first MOAS Aid Station in Shamlapur, Bangladesh, to receive medical care and assistance

In September, MOAS shifted operations to SE-Asia and renewed its commitment to assisting the Rohingya community fleeing Myanmar. Following Pope Francis’ appeal, we redeployed our vessel, the Phoenix, for its vital new mission: keeping hope alive where most needed by providing regular supplies to our team on the ground. Having become an international symbol of hope for migrants and refugees crossing the Mediterranean and Aegean Sea, the Phoenix is now supporting our SE-Asia mission by undertaking aid shipments into Bangladesh, providing regular deliveries of sorely-needed commodities.

During my stay in Bangladesh, I visited 4 camps in the region –Shamlapur, Kutupalong, Unichiprang and Balukhali- and I was moved by the dire living conditions, as well as by the huge proportion of children, mostly under the age of 12, and expecting and new mothers in urgent need of medical assistance. Rohingya people in Bangladesh need support on all levels, from clothes and food, to medical assistance and psychological support. The Phoenix has already completed its first delivery of 20 tonnes of aid, and will shortly arrive in Chittagong, Bangladesh, with the second.

On October 14th, we officially launched our first MOAS Aid Station in Shamlapur, which serves as a semi-permanent satellite facility to the makeshift refugee camp, and is fully equipped with two medical tents, a pharmacy, and clean water and sanitation facilities. Our medical staff is comprised of Bangladeshi and Italian professionals, assisted by Rohingya cultural mediators, who treat both physical and psychological wounds, bodies and souls, and monitor patients until they recover. Due to the high rate of pregnant women, we have devoted an area to assist them and if complications occur, we transport them with our ambulance to the nearest hospital. A second area is dedicated to the free pharmacy where patients can collect their prescriptions. On November 10th, we launched our second Aid Station in Unchiprang, close to the Teknaf wildlife reserve. The following day we welcomed the first patients, while in Shamlapur the first baby was delivered at our Aid Station, blessing us with the precious gift of life.

A young boy receives medical care soon after the opening of our 2nd Aid Station in Unchiprang, Bangladesh

Additionally, having seen with my own eyes the consequences of such a massive influx of people in a small community, the Aid Stations serve both the Rohingya and local Bangladeshi community, whose own resources are deeply impacted in the wake of so many arrivals.

MOAS has chosen once again to stand up for the unwanted, the forgotten and the poor, whose only wish is to live in peace and care for their families. We will not sit back idle while the world remains indifferent to the suffering of the Rohingya. We want to be there for them, offering medical assistance and support.

That’s why MOAS is in Bangladesh: to keep hope alive, because solidarity, mercy and brotherhood have no borders. Turning a blind eye is no solution.

Analysis by Regina Catrambone, Director and Co-Founder of MOAS