meeting in Milan focusses on the identifying values of Europe 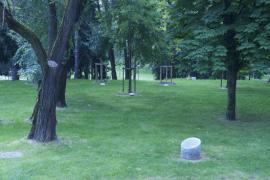 Panoramic view of the Garden of the Righteous of Milan


Gariwo, the forest of the Righteous, in collaboration with the Association of the Righteous on Monte Stella hill,  is pleased to invite you to our yearly event made of two meetings on:


The virtues of the Righteous
The identity of Europe


The conference is a first step towards the commemorations planned for 6 March, the Day set up by the EU to remember and honour the Righteous.
Over the recent years we have honoured several Righteous people by planting trees in their memory in the Garden of the Righteous on Monte Stella hill. Now we want to start from this experience to reflect on the significance of the memories linked to a common identity. This meeting is the first date towards the celebrations of 6 March, European Day of the Righteous set up by the European Parliament in Strasbourg in past May in response to Gariwo's call.


Other rapporteurs include the Mayor of Milan Giuliano Pisapia, the President of the City Council Basilio Rizzo, MEP Gabriele Albertini who was the first signatory of the Written Declaration to establish the European Day of the Righteous, the conselor of the Union of the Jewish Communities Giorgio Mortara and the honorary consul of the Republic of Armenia Pietro Kuciukian.


The programme of the meetings will be available online soon. We welcome all initiatives to plan other events in your towns and Countries in preparation of the European Day of the Righteous which will take place on 6 March. For any information please write to segreteria@gariwo.net or phone no. +39 02/36707648.