THE MONUMENT OF THE CHOICE IN LAMPEDUSA 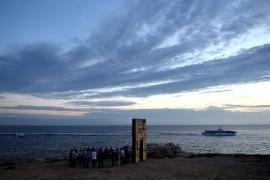 Opposite the "Porta d'Europa"

My family was saved by a fisherman during the Shoah and for this reason I remember the Righteous who save the migrants.

Wednesday 3 October 2019 was an important day for Lampedusa and our country. At 3:30 in the morning, the shipwreck of a ship of migrants, in which 366 people lost their lives and 155 were saved by brave men who responded to their conscience, has been remembered. One of these rescuers was Vito Fiorino, who, while he was in the harbor with his boat waiting for a joyful day of fishing, began to hear around him some noise that he imagined were the sounds of seagulls, that are agitated when they are attracted by fish. However they were not birds, but the cries of women and men who drowned a few meters from his boat. Thus began a terrible day and Vito, diving himself into the sea, with his courage managed to save 47 shipwrecked.

Six years have passed since that date and Fiorino never forgot the shocking image of those who could not get away from the fury of the rough waters.

How to remember them and give meaning to that tragedy that he has always considered avoidable?

Shortly before the summer, he came to visit us at Gariwo's and told us about his idea: creating a monument in the centre of Lampedusa that would remind everyone of that tragedy, on the occasion of the anniversary. While I was listening to him, I felt great tenderness, because I thought of his personal trauma and the fact that he almost conceived that monument as a restorative act for not being able to save everyone, but then, promising him all our support, I suggested that the monument was not just a symbol of mourning, but that it would testify to future generations the possibility of choose of every human being. So I proposed to him that the value of the saviors and those who, unlike others, have not been indifferent should be remembered alongside the victims. For that reason, he was an example for all. It was necessary to transmit the message, in the face of the tragedies of those who seek salvation, fleeing from the lagers of Libya and from inhuman conditions in their own countries, that nothing happens without the responsibility of men. It is therefore always possible to save lives and, when that doesn't happen, it means that someone has consciously turned his head to the other side. The monument had to bear witness to the meaning of the possibility to make a choice.

I thought about my mom's story. If I could come into the world, I owe it to the fishermen who in 1943 with their boat brought my grandparents, my mother and her sisters from the Island of Evia in Greece to the coasts of Turkey. At that time, the Germans had just arrived in Greece, and preparations began for the destruction of the Jewish community. My grandfather, Egisto Aroesti, sensing what was about to happen, managed to move the family from Thessaloniki to Athens and, with his determination, convinced some fishermen to take an adventurous trip to the Mediterranean. He convinced them not only with feelings, but also by offering them money, as it happens now with migrants and boatmen. But those fishermen, as happened in many cases in Greece, did not throw my family into the sea, to steal all their goods, but risked their lives to get to their destination. They felt so involved in that rescue. My mother had survived because of the responsible choice of the fishermen in the face of the persecution of Jews.

I often speak about this story of the Holocaust in order to remember our moral duty towards migrants. Many, however, were shocked when, faced with the tragedies of the Mediterranean, the Shoah and the indifference of a large part of Italians to the laws of race were remembered. Many people in the Jewish world did not agree, worried that a comparison with today’s could diminish the unique and terrible tragedy of the Holocaust. For example, the video of the students of a school in Palermo, who compared Matteo Salvini's Security Decree to the anti-Semitic measures of the darkest period in our country, caused such a stir. For that gesture, their teacher was even suspended, with an incredible measure of the Minister of Education. Those students undoubtedly forced the historical comparison, but they perfectly interpreted the moral meaning of the memory of the Shoah. If we have understood what happened to the Jews, the fundamental issue becomes the habit of not being indifferent to the tragedies of our time. Preventing the arrival of migrants, describing them as dangerous for our future, saying that they want to invade us and "contaminate us as Muslims", is first of all a manifestation of evil and hatred that corrupts the moral of society. It is certainly not a new Holocaust, but it can open a drift with very dangerous outcomes that goes far beyond a failure to help. Those who react to the shipwrecks of boats in the Mediterranean would not have the best solution to solve the problems of Africa or to involve Europe in taking charge of those who land in Italy, but have made their own the teaching of Primo Levi: those who do not accept to be in the grey zone of indifference and take responsibility are the best living witness of the Holocaust, even if they do not talk about it directly. Primo Levi was upset not only when the memory was lacking, but when he saw that his contemporaries were replicating hatred and indifference. It is the same feeling that Liliana Segre felt this year on her skin, and that she wanted to tell with clear words in her speech to the Parliament. She could no longer bear the hatred that politics sowed in our country and the indifference towards migrants that the Minister of the Interior extolled as a national virtue.

I thought of all this when I spoke to Vito Fiorino.

Precisely because of the history of my family and the memory of the victims of the Shoah, I thought it was my duty to do everything possible to ensure that his project for a monument was carried out as quickly as possible without impediments of any kind. This is the reason why I was with him in Lampedusa to remember that tragic day that changed his life. On that day, I told him that with his courage and obstinacy, he not only saved lives, but he went further. He saved the dignity of our country and showed that all of us can choose whether to go towards selfishness and a nationalism indifferent to others, or whether to make our Nation a moral example for the whole Europe. It seemed that the worst were going to win, but Vito Fiorino, like many others, has not given up and gives us hope for the future.

Today something is deeply changing: the millions of young people who demonstrate in the world for the survival of the planet question sovereignists and nationalism. They tell everyone that there is only one homeland and that we must saved us all together. The concept also applies to migrants, because they have the same fate as us. If we feel the danger looming from a nature that we have manipulated, there can be no barriers to the populations of Africa threatened by drought. We are all called upon, on the same principle, to take care of them. We can and must discuss about ways, but the first step is to save migrants if they are at sea. It is the first act that opens up our responsibility and from which everything else derives. I remember that in the face of anti-Semitic persecution, the first step was to save the life of the Jew and then the strategy of resistance to Nazism descended from it. The fishermen who helped my family in Greece and the fishermen of Lampedusa such as Vito Fiorino moved in the same vein, although under different conditions.

Whoever saves the life of a migrant reminds us to think about the causes that have generated the suffering of Africa. Instead, those who have tried to prevent his rescue not only denied the right to salvation at sea, but also have deliberately tried to cloud our consciences, making us inhumane and deaf to the emergencies of the African continent.

Lampedusa, six years after the 3 October 2013