a poem by Kizito Kalima 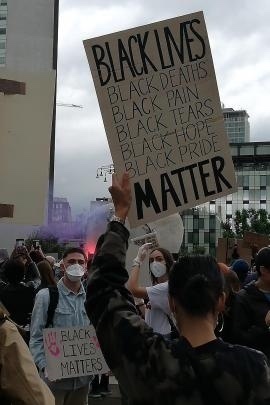 An image from "Black lives matter" in Milan

Yes, Tomorrow with an S . . . many tomorrows

therefore I should be dealt with accordingly . . .

that killed my family . . . making me an orphan at young age.

A gentle giant who refused to be defined as . . .

A Man of Peace.

Stand Up & Speak Up

the Genocide against Tutsis in Rwanda . . .

We survived because they chose . . .

Unfortunately, none of us will be declared a winner in the End when . . .

Just two losers who failed to respect the human race and chose to flex their muscles . . .

Analysis by Kizito Kalima, The Peace Center for Forgiveness and Reconciliation of Indianapolis